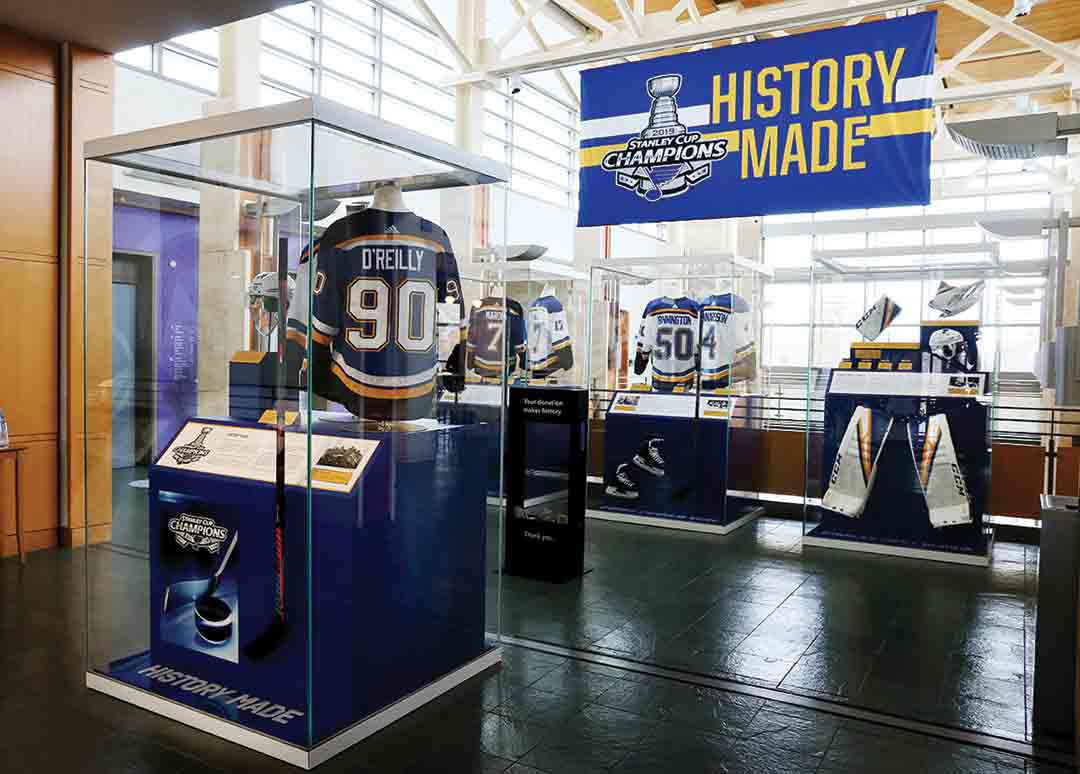 “History Made” is available for viewing at the Missouri History Museum until Jan. 26, 2020. 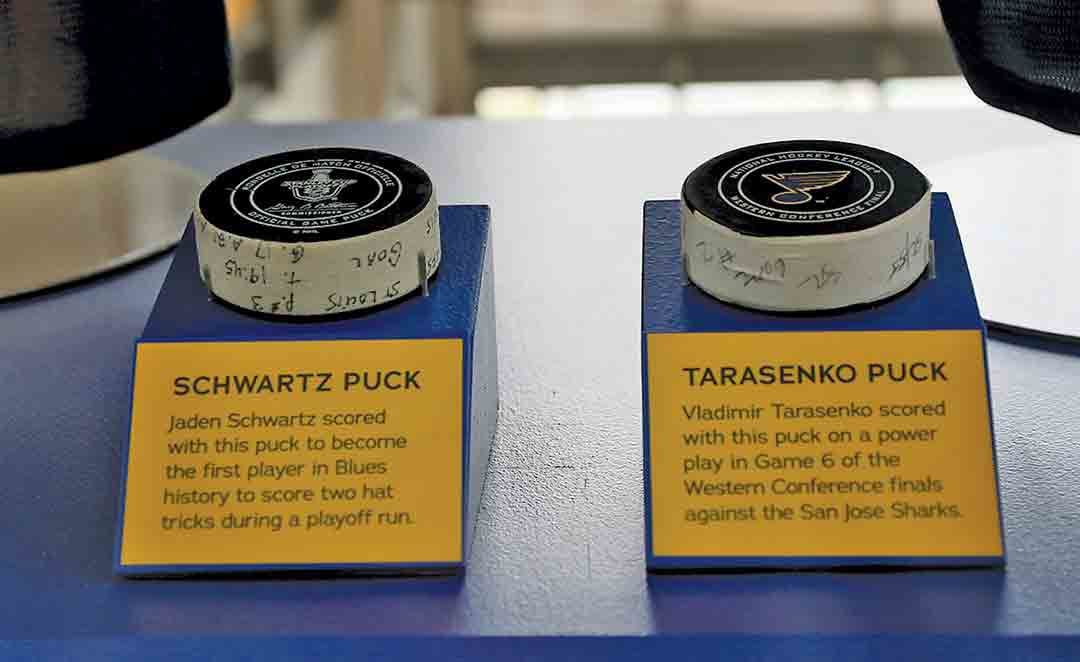 Jordan Schwartz’s history-making puck is featured in the second case of the exhibit.

Those are the opening words of the first display case in “History Made,” an exhibit at the Missouri History Museum featuring the St. Louis Blues hockey team and their journey to a Stanley Cup victory. Through four displays, the exhibit takes visitors through a key moment in St. Louis sports history — and the moments leading up to it — amplified by actual equipment worn and used by Blues players.

Curator Jody Sowell, the museum’s managing director of strategic initiative, opens the exhibit with a case introducing the significance of last summer’s win.

“The great thing about this exhibit is it works for visitors who know a lot about sports and it works for visitors who don’t necessarily know a lot, or who got swept up by the Blues craziness during the Stanley Cup run,” said Sowell. “It’s just as much a St. Louis story as a hockey story. Sports has the power to bring people together and we certainly saw that with this.”

The second case, which focuses on the lead-in to the Stanley Cup, highlights a jersey and puck from player Jaden Schwartz, the first player to complete two hat tricks — or score three points in the same game — in the same postseason since 2008. According to Sowell, it’s a feat only 18 players in all of NHL history have achieved.

Schwartz isn’t the only player with paraphernalia on display. “History Made” has an extensive list of jerseys, pucks and other equipment from Ryan O’Reilly, Vladimir Tarasenko and more.

“No matter who your favorite player is, you’ll probably see something from that player,” said Sowell.

The exhibit’s third case talks about another historical moment: the Blues’ first victory in a Stanley Cup game. The Blues joined the NHL in 1967 and made it to the Stanley Cup playoffs the first three years. But the Blues were swept 4-0 in each of those series. When the Blues lost their first game in their most recent Stanley Cup run, according to Sowell, many fans thought that history might be repeating itself. Just winning their first Stanley Cup game on May 29, 2019, was a victory in itself, he said.

The final case — Sowell’s favorite — focuses on game seven, in which the Blues secured their title as 2019 Stanley Cup champions. The case contains all four pucks which scored the Blues’ winning four goals, as well as the protective gear of goalie Jordan Binnington.

“What amazed me most was the fact that he was able to block so many goals. It felt like any moment, we were going to lose this game. So you see Jordan Binnington’s pads, blocker and gloves, and if you look closely, you can see the puck marks from all the pucks he was able to keep out of the net,” said Sowell. “I see a lot of visitors standing here getting photos taken with it. I love those moments in which people start to share stories with each other about where they were when this was happening.”

Ultimately, said Sowell, the goal of “History Made” is to spark discussion among St. Louisans. The Blues, he said, are a major point of pride for the city, and the celebration of victory has a way of bringing people together. In fact, the hockey team itself is responsible for cataloguing and loaning the artifacts on display.

“We were the site of the Blues’ official ring ceremony. When they got the Stanley Cup rings, they got them here. I think that shows how much the Blues are thinking about history. They talk just as much about community as we do,” said Sowell. “What I want people to always come away with is that stronger connection to St. Louis. We really believe that the more people know about the past, the more they’ll be connected to the present and the more they’ll be invested in the future.”