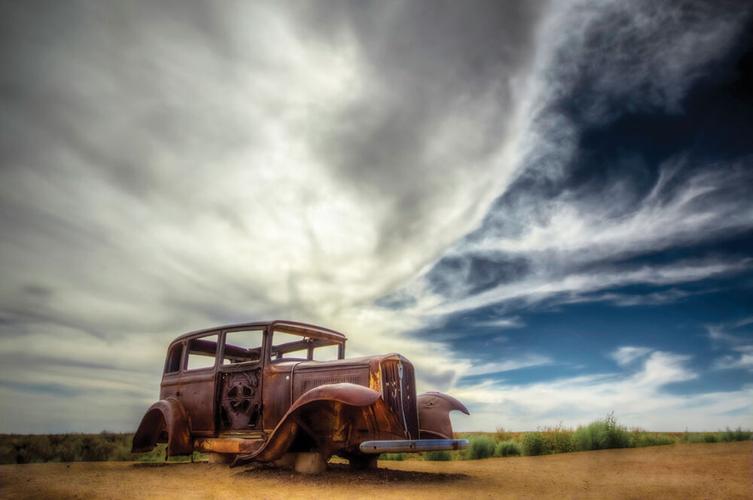 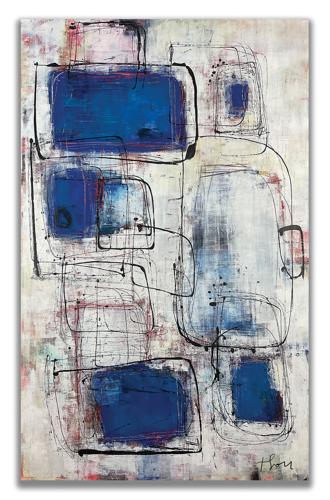 Brian Kirchoff is an abstract artist whose series, “Raw,” is currently on display at the Kirkwood Performing Arts Center, 201 E. Monroe Ave. 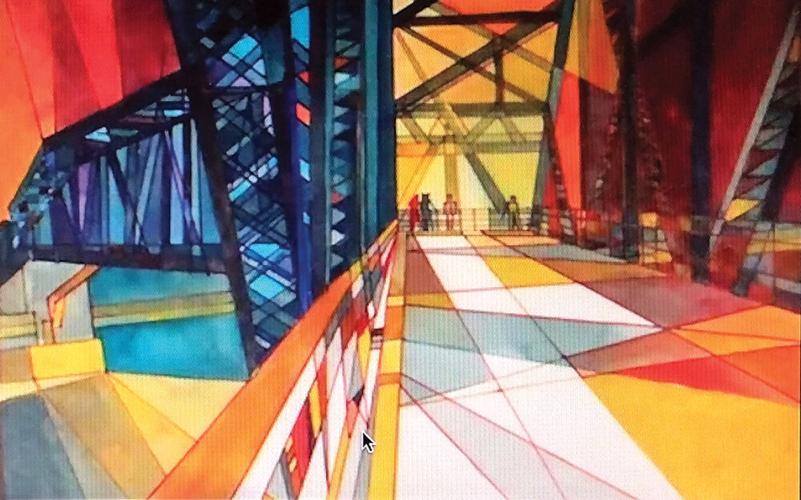 This watercolor painting “Chain of Rocks,” is by Webster Groves artist Marilynne Bradley.

Gallery open to the public for one hour prior to performances

The works of three local artists are now on display as part of the summer art exhibition at the Kirkwood Performing Arts Center.

Kirkwood Arts Commission member Mark Braun, who is also a photographer, is part of a team responsible for finding art to adorn the walls at the Kirkwood Performing Arts Center. The summer art exhibition was a chance for local artists to display their work at the performing arts center.

“We asked artists from the community to submit work for consideration,” Braun said. “We tried to look for works that go well together, as well as the quality and size of the work.”

The opening reception for the exhibition, held on July 13, presented attendees with an opportunity to meet the artists: Brian Kirchoff, Marilynn Bradley and Diana Linsley. The works of these artists will be on display through Oct. 15, at the Kirkwood Performing  Arts Center, 201 E. Monroe Ave. in Kirkwood.

Abstract artist Brian Kirchoff of the Central West End entered his series called “Raw.” He said his work in this series was inspired by the thought of seeing beauty outside of the ordinary.

“I wanted to start doing something different,” said Kirchoff, who began working on “Raw” in the summer of 2021.

“I’ve kind of been doing the same sort of work and I thought it was time to do something a bit more abstract,” he continued. “Abstract does not necessarily fall into the ‘pretty’ category. I wanted to start coming up with something that was a bit more messy. Some people will look at it and wonder what the heck is going on and other people are fascinated by it, which is typical art really.”

Along with Kirchoff’s work, watercolor paintings by Webster Groves resident Marilynne Bradley are also on display as part of the summer arts exhibition.

Bradley has done numerous paintings of city life and landmarks over the years. Her geometric series includes the painting “Chain of Rocks,” which is a watercolor perspective of the Chain of Rocks Bridge. According to Bradley, painting requires a lot of change and experimentation in both content and the technique.

“Each painting is an effort to explore the subject from a different viewpoint,” she said. “This allows a personal statement for each work of art.”

Next to Bradley’s watercolor paintings on the top floor of the Kirkwood Performing Arts Center is Diana Linsley’s photography.

Linsley, a longtime Kirkwood resident who now lives in Crestwood, was a photographer for the Webster-Kirkwood Times for more than 15 years. All of the photos in her “Route 66” series were taken during a Route 66 road trip, one of the original highways in the United States.

Linsley’s trip took her across the country. The series features photographs from several states, including Missouri, Oklahoma, Arizona, New Mexico, Texas and Kansas. She said she decided to print her photos for the series on metal so the colors would appear more vibrant.

At one point on her trip she left the camera memory card at a hotel in California.

“I was nervous because I had quite a few of my pictures on that card,” Linsley said. “I called the hotel a few times and they told me they found it and mailed it back to me.”

Linsley specializes in real estate photography along with landscape and outdoor photos. Throughout her long photography career with the Webster-Kirkwood Times, Linsley earned 20 awards for her works.

The Kirkwood Arts Commission is planning to have three to four art shows a year, according to Braun. He said each show will have an opening reception so people can meet the artists. Should any of the art be for sale, all of the earnings would go directly to the artist.

Kaelin Triggs is a journalism student at Webster University, and is an intern for the Webster-Kirkwood Times.