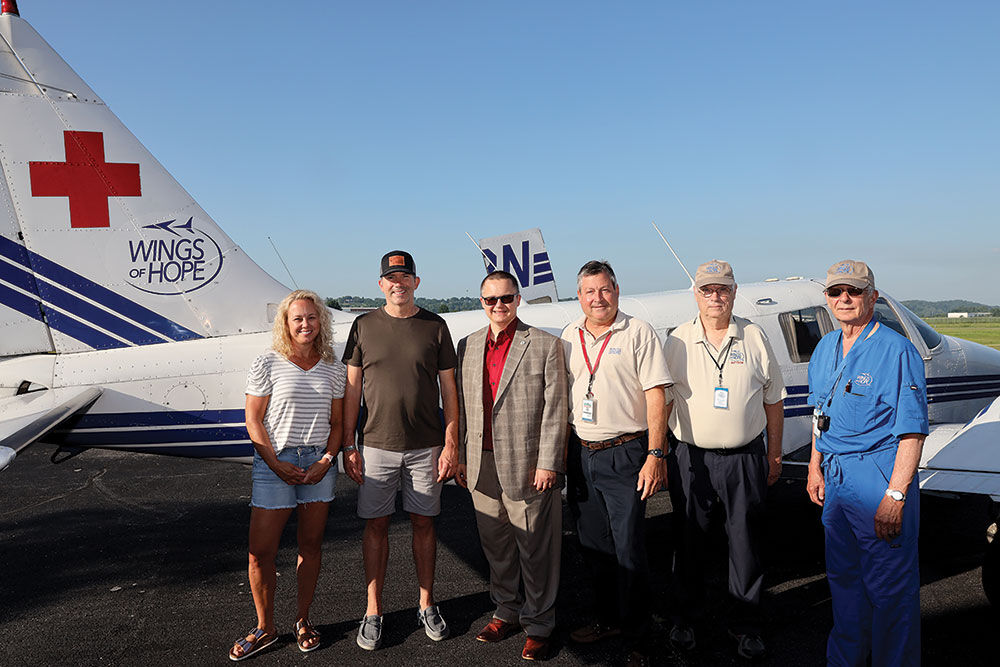 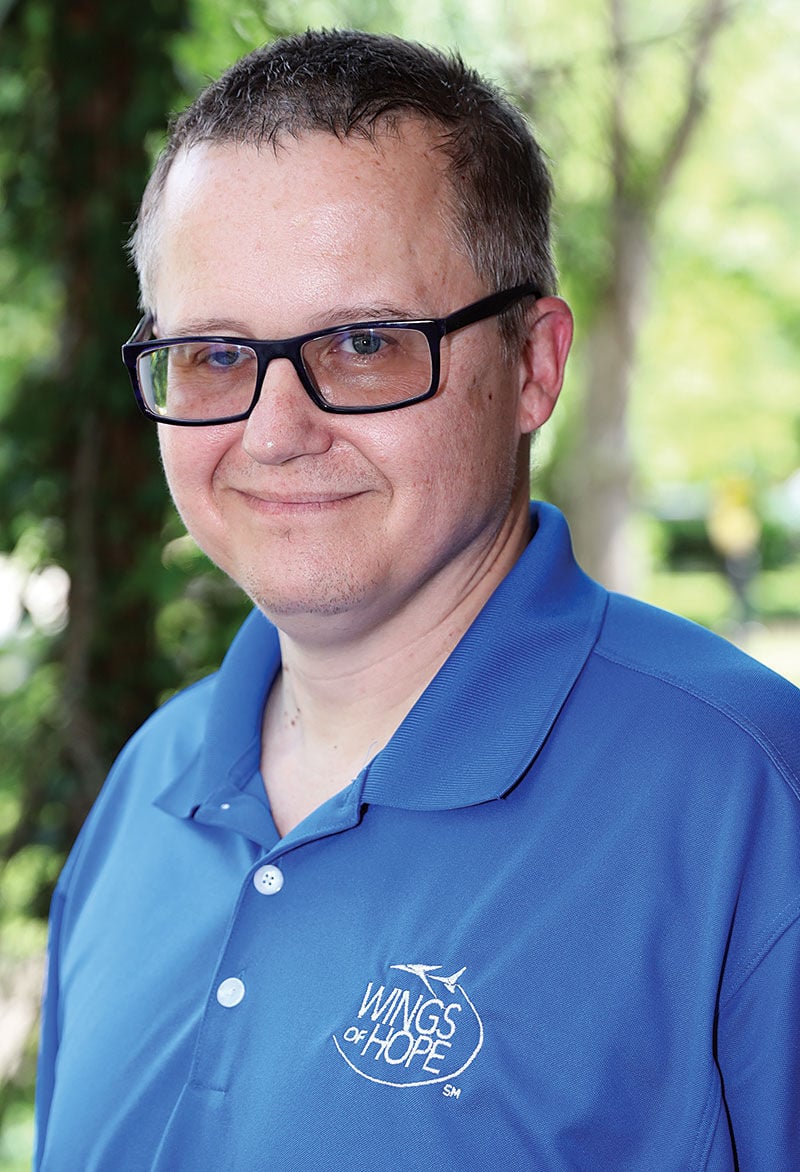 “One of the blessings of this group is to get to see people progress through their care.” — Wings of Hope President & CEO Bret Heinrich

Mark Green is battling a brain tumor for the second time. Fortunately, the wings of this Kirkwood area man’s guardian angels come in the form of actual planes.

When Green’s situation required a June 11 trip to the Mayo Clinic in Rochester, Minnesota, volunteer pilots with regional nonprofit Wings of Hope flew into action to expedite the life-saving flight.

He was flown to and from the clinic, all in one day, to get chemotherapy follow-up, with the fast, customized transportation made possible only by this Chesterfield-based, charitable aviation organization whose supporters focus on humanitarian hardships.

Ironically, Koch was instrumental in initiating this flight. After Koch’s neighbor, who is Green’s father-in-law, mentioned to him that Green’s cancer had returned, Koch put him in touch with the nonprofit’s coordinator to explore options for a trip to the clinic.

Since its inception, Wings of Hope has directly served millions of people around the globe assisting more than 60,000 people during 2020, including 169 U.S. patients. The nonprofit was  twice nominated for the Nobel Peace Prize in 2011 and 2012.

Green, a 48-year-old client director with Slalom Consulting, was a recipient of Wings of Hope’s Medical Relief and Air Transport program, which serves patients throughout the Midwest.

“I first learned of my brain tumor in 2014,” he said. “In August of that year, it was successfully removed at Barnes in St. Louis. I was told it could, and probably would, come back within five years. I made it six years and they found it on a scan in October of 2020.”

Last fall, Green said he knew it was still the same low grade and invasive tumor, but the slow-growing, non-cancerous type at that stage. About the time it was found again, Green was  introduced to Cortney McKenna, who had been a teacher at the same school his children attend in Kirkwood — St. Gerard Majella.

“Come to find out, Cortney had the same tumor as me and the exact same timing of both,” he said. “She made a call to Mayo, and I was seeing a doctor the next week. We went through a lot to get scheduled with COVID in full swing.”

Green then found a condo near Rochester to rent for the six weeks he was undergoing radiation treatment.

“This is when Cortney told me about Wings of Hope,” he said. “At the same time I was working with them on my needs, my father-in-law mentioned his neighbor, Phil, was a pilot for them and would fly me whenever he could.

“Next thing I know, I’m approved and flying to Mayo along with my sister from Nashville, who was staying with me for the six weeks as my caregiver,” he added. “Due to COVID-19 restrictions with Wings of Hope, I flew commercial flights, for which the group paid.”

Green said his radiation treatments ended in January, and he’s been undergoing chemotherapy here in St. Louis since February.

“This June trip was my first opportunity to fly on a private plane, and the best part is Phil was our pilot,” Green said.

The trip was also special because Green received medical verification that his tumor had shrunk dramatically.

“It was crossing into my right side, and now that’s all gone,” he said.

Green’s trip was the 21st time Koch has flown to the Mayo Clinic on behalf of Wings of Hope. He said he’s piloted other trips for the organization to Kansas, Arkansas and Texas.

Fourteen regional pilots currently devote flights to the nonprofit. Koch, who received his pilot license when he was 17 years old, has been flying for four decades.

“Since I was a kid, I knew about Wings of Hope through reading one of my dad’s flying magazines,” he said, adding that his grandmother Loretta Slavick, an aviator herself from 1947 through the 1960s, drove him to his first flying lesson when he was just 15 years old.

Slavick was a co-organizer of the Missouri Pilots Association and Kirkwood community leader who served on an advisory committee that resulted in St. Louis city officials purchasing the dirt field that became St. Louis Lambert International Airport.

Koch said he first donated a truck to the charity to help raise funds, but hoped to do more.

“I’m passionate about aviation, and volunteering as a pilot for this wonderful organization is a way to give back by using what I’ve learned,” he said. “We get to see lives being transformed, particularly those people who we fly dozens of times for multiple treatments.”

Wings of Hope covers out-of-pocket expenses of the donated trips, saving recipients thousands of dollars for each chartered flight, in addition to the convenient, time-saving direct routes.

Kirkwood resident Don Kukla, who chairs the Wings of Hope board of directors, said the majority of the nonprofit’s funds come from three to four annual fundraisers.

“We just raffled off an airplane. Planes are donated to us — some are sold and some are put into service. The 5,000 raffle tickets sell out in about five hours,” Kukla said. “This year, we had several people who donated their COVID-related stimulus checks to Wings of Hope.”

Wings of Hope’s annual gala includes silent and live auctions. He said the organization hopes to be able to purchase some larger, twin engine planes to be able to transport patients farther distances.

“We may establish another base in Denver, and we’d like to set up overnight facilities and accommodations for guests,” Kukla added.

Kirkwood resident and Wings of Hope President Bret Heinrich said the organization has been delighted to help Green and will stick with him until he’s done with treatments.

“One of the blessings of this group is to get to see people progress through their care,” he said.

Heinrich, who leads the nonprofit’s strategic planning, said Wings of Hope is seeking additional pilots and hopes to inspire youth to consider careers in science, technology, engineering and mathematics. To that end, during 2019, the organization launched “Soar Into STEM” as a four-week, hands-on learning experience to provide middle and high school students project-based learning, connections to STEM curriculum, and a front-row seat into the workings of how Wings of Hope is using airplanes to change and save lives.

Several personal Wings of Hope connections to the Kirkwood area have already led to some unique relationships.

“We offered Soar to Kirkwood educators to attract young people into aviation as a career, and we’ve already had one Kirkwood High School student, Ethan Peterson, who completed his first certified solo flight and earned his student pilot’s license,” Heinrich said.

He added that Wings of Hope is also working with Boeing as a funding partner to explore a virtual program for pilot testing.