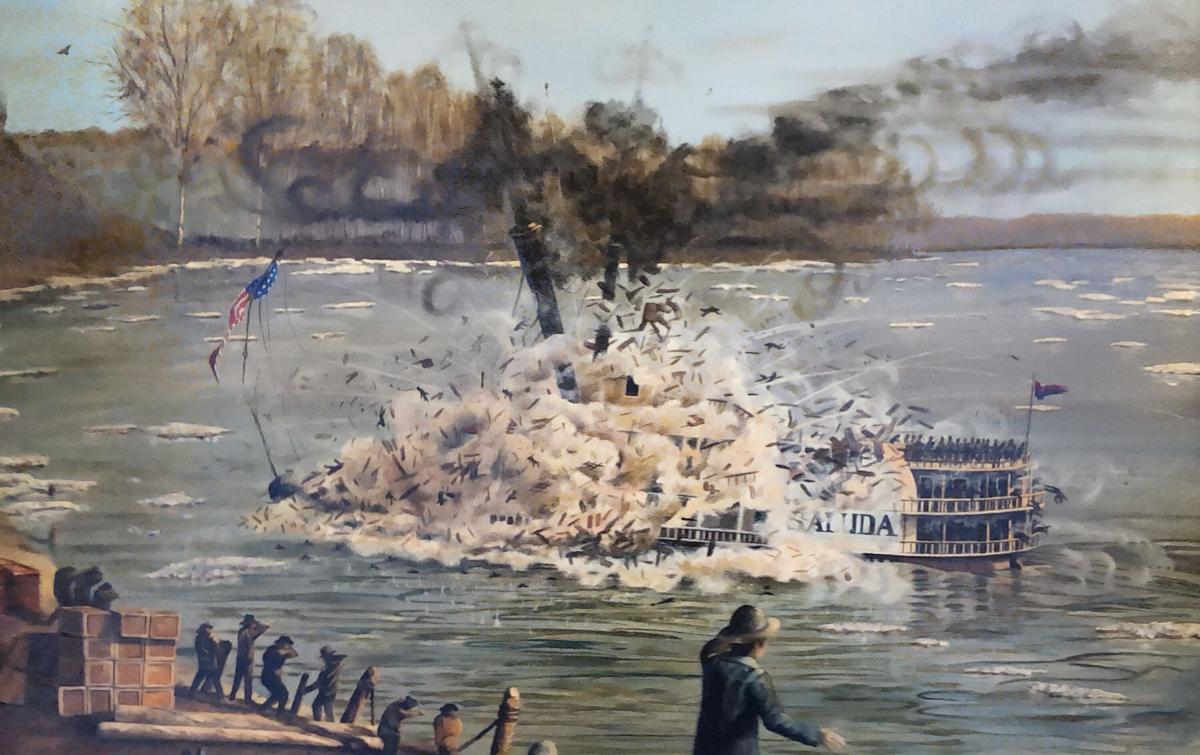 This painting shows the explosion of the Saluda steamboat. | photo courtesy of the Lafayette Historical Society 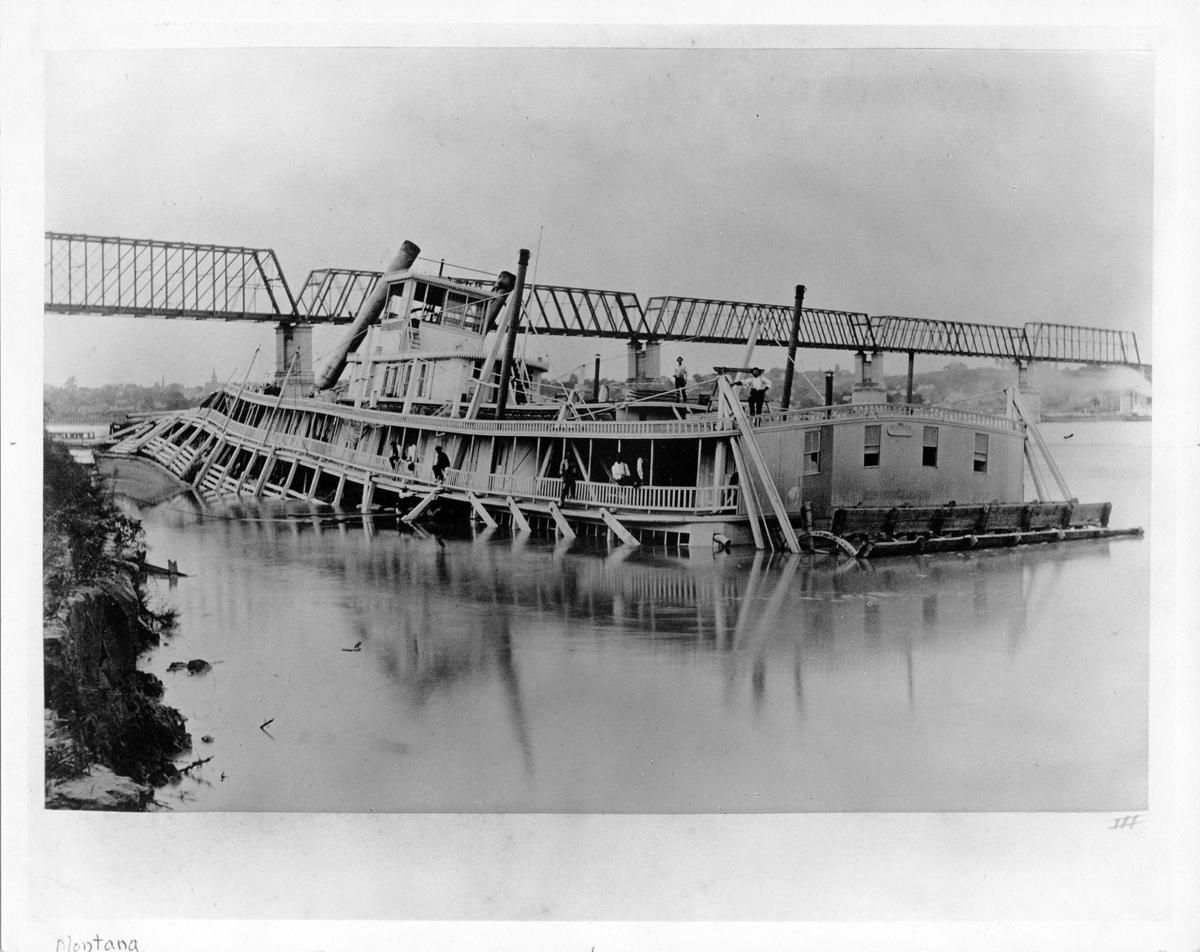 This painting shows the wreck of the Montana shortly after it struck the St. Charles railroad bridge. | Photo courtesy of the St. Louis Mercantile Library at the University of Missouri St. Louis 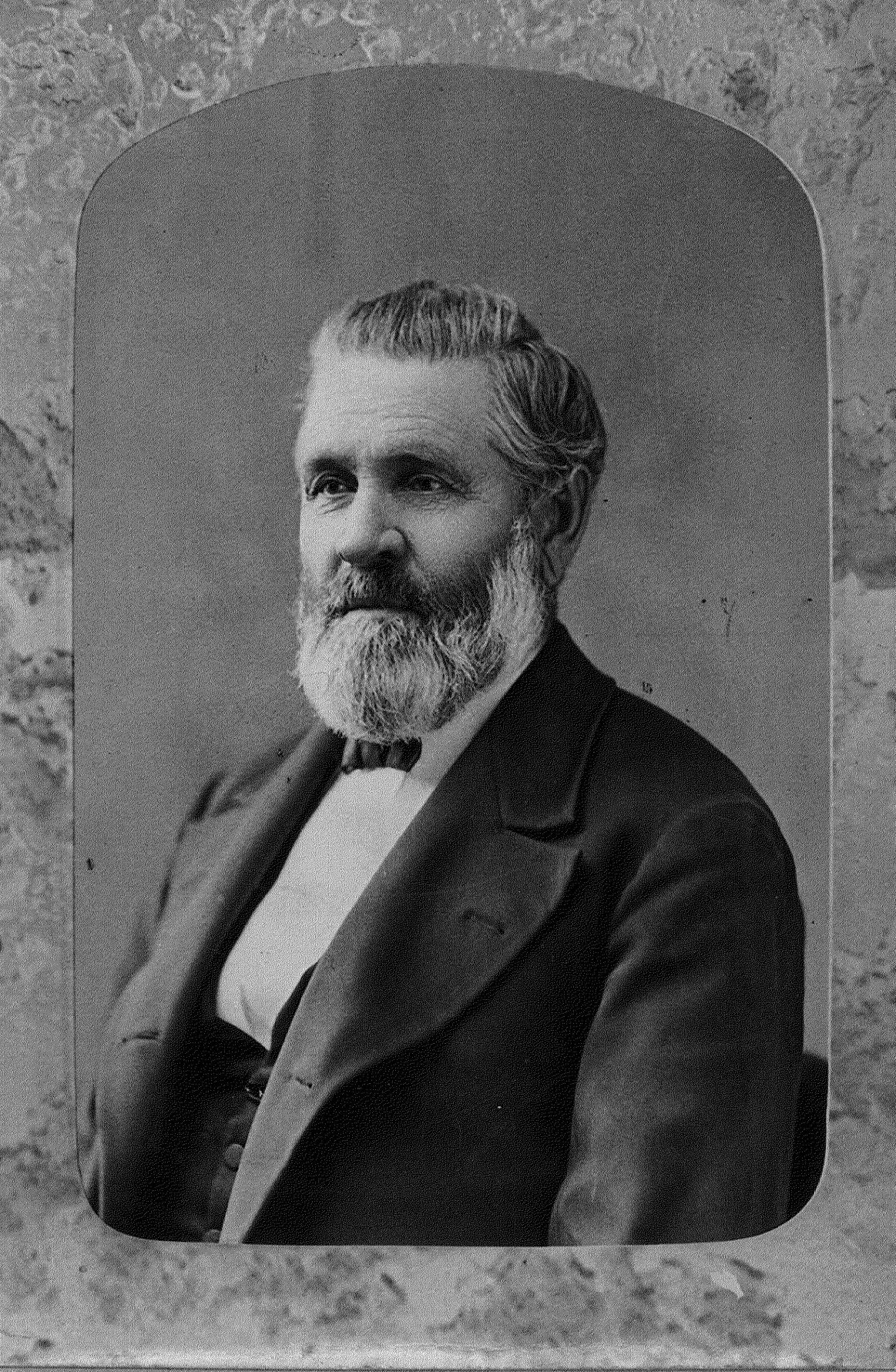 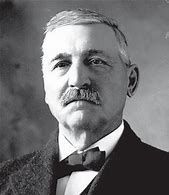 Long before there was Captain 11 commanding a cartoon showboat on St. Louis television in the 1960’s, a real steamboat captain named Richard J. Lockwood lived in St. Louis. He had a summer home in Webster Groves and came to St. Louis before the Civil War.

Captain Lockwood’s summer home is on the present-day campus of Nerinx Hall High School in Webster Groves. A nearby thoroughfare, known as Lockwood Avenue, bears his name and his family owned 80 acres in Webster Groves.

Steamboat captains were once like royalty in America. That’s what a Kirkwood couple, Vicki Berger Erwin and James Erwin, discovered when researching and writing their new book, “Steamboat Disasters of the Lower Missouri River.” The book has a chapter on famous captains who plied the Missouri River.

Although the story of Lockwood will have to wait for another book, the Erwins do tell tales of captains Grant Marsh, Henry Dodd, Joseph LaBarge, Joseph Kinney and more. They were all characters with colorful histories that sometimes included shipwrecks and calamities on the Missouri River.

“William Massie, who was born near Hermann, was one of my favorites, said James Erwin. “He began working on the river in the 1840’s and was still serving as a captain at the age of 78, when he came to blows with Captain Grant Marsh for criticizing the company Massie worked for.

“Massie liked to play poker and was sitting with Wild Bill Hickok in 1876 when Hickok drew aces and eights, and Jack McCall shot him,” James Erwin noted. “The bullet passed through Hickok’s skull and lodged in Massie’s wrist. He never had it removed. He would announce upon coming to shore: ‘The bullet that killed Wild Bill is in town!’”

Massie was the captain of the Montana, the largest steamboat to travel the Missouri River, when it struck the railroad bridge at St. Charles and sank. A few months later John Gonsallis, the captain of the Montana’s sister ship, the Dacotah, struck a snag near Providence Bend. Massie asked how Gonsallis could have failed to see a stump as prominent as the one there, to which Gonsallis replied that the stump wasn’t nearly as prominent as the St. Charles Bridge.

“One of the homes of Captain Joseph Kinney still stands today near Boonville,” said Vicki Erwin. “It is 12,000 square feet and certainly had to be among the most beautiful and expensive homes of the day.

The captains were hailed and feted in towns all along the Missouri River. Banquets were given in their honor and they were awarded gifts and silver cups.”

Steamboat captains were paid well, but they sometimes paid with their lives doing the dangerous work of navigating the Missouri River. They dealt with storms, floods, ice floes, disease, crime, fire, explosions and the mayhem of war. Their boats were often sunk by snags hidden under the river.

One of the deadliest disasters was the explosion of the Saluda in 1852, when 75 men, women and children were killed. The Saluda was leaving the landing at Lexington, Mo., in a third attempt to steam up the river swollen from the spring rise, when its boiler exploded.

The explosion hurled people and debris into the river and all the way to the top of the bluff at Lexington. The townspeople immediately began rescue efforts. A few of them adopted children orphaned in the blast.

Perhaps the most historically significant disaster, although the only victim was a mule, was the sinking of the Arabia, according to James Erwin. It’s the best-known of the Missouri River disasters because of the artifacts that were recovered and what they tell about life in the mid-nineteenth century.

“The first question anyone asks when they hear we have written a book about steamboat disasters is: ‘Have you heard of the Arabia?’ We have,” said James Erwin. “It was the Arabia that gave us the idea for the book, along with a set of maps showing the location of all the steamboats that sank on the Missouri River between its mouth and Omaha – hundreds of them.”

The Arabia sank near Parkville north of Kansas City in 1856. The contents of the Arabia are a time capsule of pre-Civil War life along the Missouri River. They can be viewed at a museum on Grand Avenue in the Kansas City flea market neighborhood today.

“The steamboat was on its way to deliver a winter’s worth of goods to the Nebraska frontier when it hit a snag and sank,” said Vicki Erwin. “We can view those items – what a pioneer in the 1850’s needed to live and build a life – in the Arabia Museum.

“They show us small details of what life was like and what was important. The shoes, for example, aren’t made for right foot, left foot. They are interchangeable. And there are shoes galore, along with hats, dishes, hardware to build new home, preserved foods, keys, trade goods for Native American trade and so much more,” Vicki Erwin explained.

Interestingly, when the excavation team that uncovered the Arabia embarked upon its adventure, the mission was treasure hunting to make money. By the time team members finished excavating the boat, they were interested in a preserving history.

Kirkwood’s Vicki Berger Erwin and James Erwin are doing their part to preserve history as well with “Steamboat Disasters of the Lower Missouri River,” a book with an index that lists 56 individual boats that sank by name. The average life of a Missouri River steamboat was a paltry three years.

The couple’s research includes the role that steamboats played in the cholera epidemic that hit St. Louis and Missouri before the Civil War. Not long after their book rolled off the presses, the 2020 coronavirus epidemic began to spread. Bookstores shuttered and book talks were canceled. The Erwins hope for a better summer for the book trade. For more information contact vickibergererwin532@gmail.com