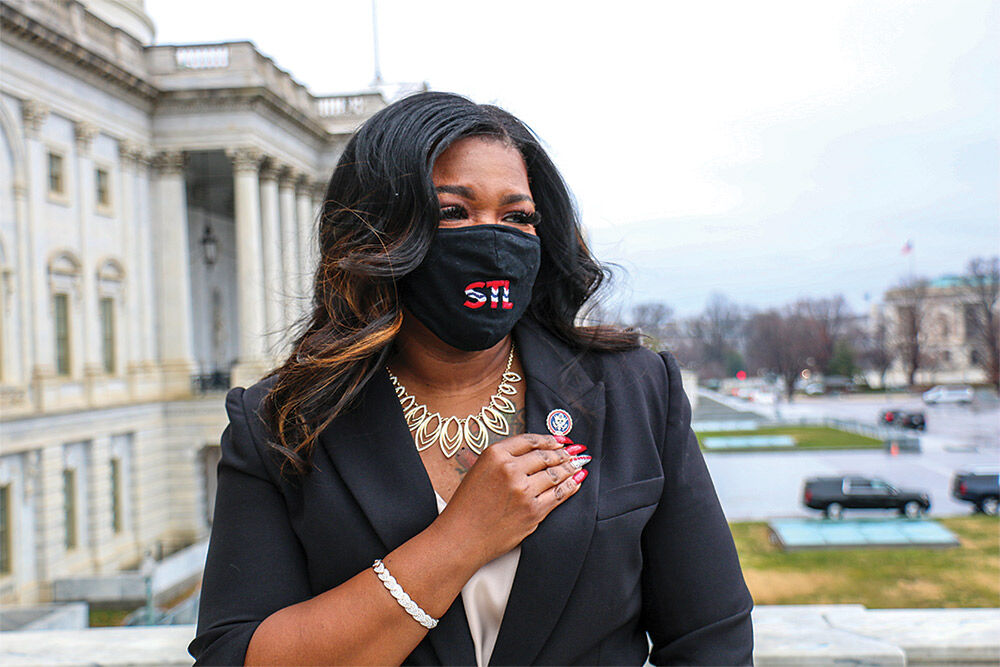 U.S. Rep Cori Bush, D-St. Louis, was sworn in at the Capitol on Jan. 3. She is the first Black woman to represent Missouri in the U.S. House.  | photo courtesy of Cori Bush’s office 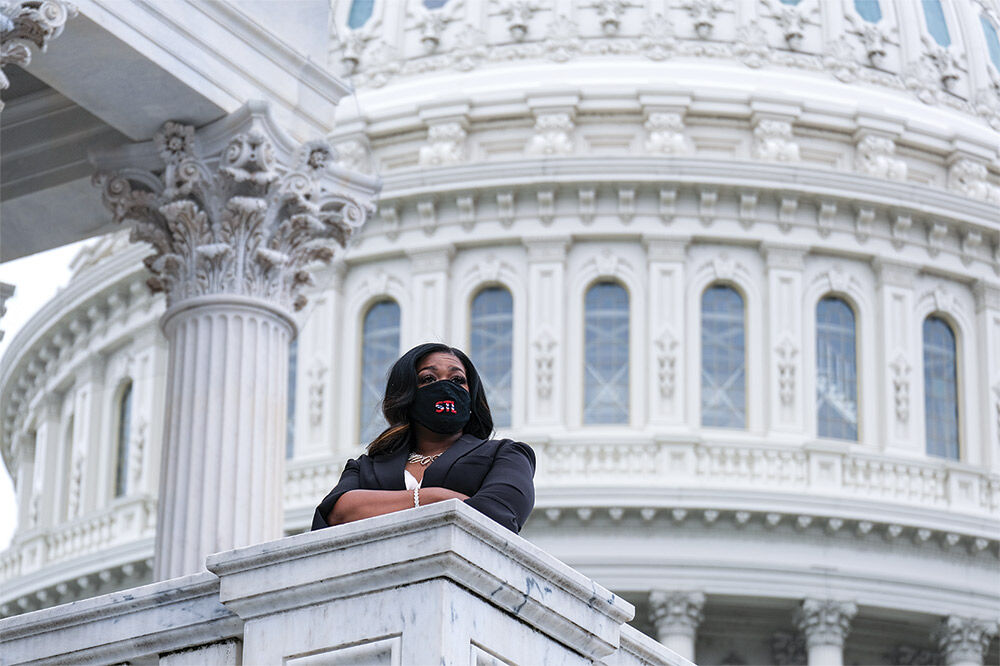 U.S. Rep. Cori Bush on Jan. 6 wrote on Twitter: “My first resolution in Congress will be to call for the expulsion of the Republican members of Congress who incited this domestic terror attack on the Capitol.” | photo courtesy of Cori Bush’s office

In just a few short weeks in Congress, newly-elected U.S. Rep. Cori Bush, D-St. Louis, has given her city visibility on issues ranging from education equity, racial discrimination, environmental racism and the impeachment of a president.

Like it or not, the new freshman in Congress has a voice and it’s getting heard. After defeating longtime incumbent Lacy Clay in the 2020 Democratic primary and scoring an easy win in the general election, Bush is now the first Black woman to represent Missouri in the U.S. House.

Bush’s first congressional district takes in parts of Webster Groves and Rock Hill. It includes all of St. Louis City and much of northern St. Louis County. Ken Warren, a noted pollster and political science professor at St. Louis University, is a Webster Groves constituent of Bush and admits he’s underestimated her.

“I was wrong in my prediction for the Bush-Clay primary race in 2020,” said Warren. “Incumbents in our political system have the huge advantage, and I did not really think she could bring about an upset of the seat held so long by Lacy Clay and his father, William Clay.

“Once she won the primary, she was a sure bet in November, regardless of what happened with the Biden-Trump presidential election,” added Warren. “And she has attracted a lot of attention and media notice right out of the gate as a vocal member of Congress in 2021.”

Bush hasn’t been shy about her feelings for Donald Trump. She voted for his impeachment along with her Democratic colleagues and a handful of Republicans in the House. She lamented his acquittal as a lost opportunity for justice in the wake of the Jan. 6 chaos at the Capitol, which Trump was accused of inciting.

The storming of the Capitol by Trump supporters has raised calls for a commission to investigate the violence by those who claimed the Nov. 3 election of President Joe Biden was a fraud. Bush had her own confrontation with Georgia Republican Congresswoman Marjorie Greene, who also insists the Biden election was fraudulent.

Bush subsequently asked that her Congressional office be moved from its close proximity to Greene’s office. Bush also has taken to the House Floor to denounce Greene’s promotion of conspiracy theories associated with the extremist group QAnon.

The Gateway City House member voted with the majority to remove Greene from the U.S. House Education and Labor Committee and the House Budget Committee.

“St. Louis and I rise in defense of our nation’s school children,” Bush said in her House speech. “I cannot sit idly by and allow white supremacy and hatred to have decision-making power over our students’ futures.

“To my Republican colleagues — let history remember what you did in this moment. A prerequisite for appointment to these committees — and for all that we do — must be that you love and represent all people,” she continued. “We cannot build an equitable and anti-racist education system if a seated House Education and Labor Committee member incites violence through the perpetuation of racist lies in an attempt to overturn an election.”

A Lot Of Energy

“She seems to be bringing that same energy to the House now,” said Jones, who is also a constituent in Bush’s district as a University City resident. “A new member of Congress has a choice to make: Are you going to stay local and work on constituent services? Or, are you going to work on national issues? It’s easier to do the national spotlight if you don’t have to worry too much about the next primary election.”

According to Jones, political polarization has many U.S. lawmakers taking stands and speaking out. There are pluses and minuses in that equation, including the pitfall of being typecast as a radical. In Bush’s case, that can mean being lumped into “The Squad,” a group of liberal female legislators often loathed by Republicans and conservative media outlets.

Jones said he misses the days when there was a sizeable St. Louis Congressional Delegation. That delegation was bi-state and bi-partisan and united “to bring home the bacon” and promote the St. Louis region. Such cooperation is far less likely with St. Louis being represented by Democrat Bush and Republican Congresswoman Ann Wagner in the 2nd District.

Political scientist Warren of Webster Groves said Bush has made remarks that are cringe-worthy for moderate Democrats and U.S. House Leader Nancy Pelosi. Warren said Bush may grow to be more measured with her comments, as has happened with second-term U.S. Rep. Alexandria Ocasio-Cortez, D-New York City.

“Bush has sounded a little crazy with comments about de-funding the police or de-funding the military,” said Warren. “That’s not smart when a lot of people in her district are employed by Boeing or by the National Geospatial-Intelligence Agency coming to downtown.”

Warren said that while Bush can be outspoken and abrasive, she obviously has a following and appeals to younger voters and minorities in her district. He said the political world is in flux and she has a piece of that world. Warren said Bush is right to be strident about some of the issues she feels strongly about.

An issue that has attracted local support and national recognition for Bush involves her focus on remediation of hazardous waste sites and attention to environmental justice. Bush’s district includes dumping grounds for radioactive contaminants that have earned St. Louis a national moniker as “Atomic City.”

Northwest St. Louis County is home to the Coldwater Creek radioactive sites, which are located from St. Ann to the Missouri River. Those contaminants, along with uranium waste buried in the West Lake Landfill Superfund site in Bridgeton, are left over from the role St. Louis played in the development of the atomic bomb.

First District constituents have no problem with Bush being loud and abrasive over the deadly radioactive contamination near their homes. They have raised their own voices for more than a half century on the issue, and the waste still remains to be cleaned up.

Bush recently joined Sen. Ed Markey, D-Massachusetts, in a news conference to promote legislation that would direct the federal government to fund a study of environmental racism nationwide. The study could help determine where federal dollars should be put to do the most good.

According to Bush, St. Louis stands to gain from the creation of a national database of research on racial segregation, income inequities and environmental hazards. St. Louis has a history of low-income areas plagued by lead pollution, poisoned air, PCB contamination and the dumping of hazardous chemical wastes.

The federal study proposed by Markey in the U.S. Senate and Bush in the House is likely to mirror a 2019 Washington University report that found Black residents in St. Louis are exposed to far greater environmental risks than whites.