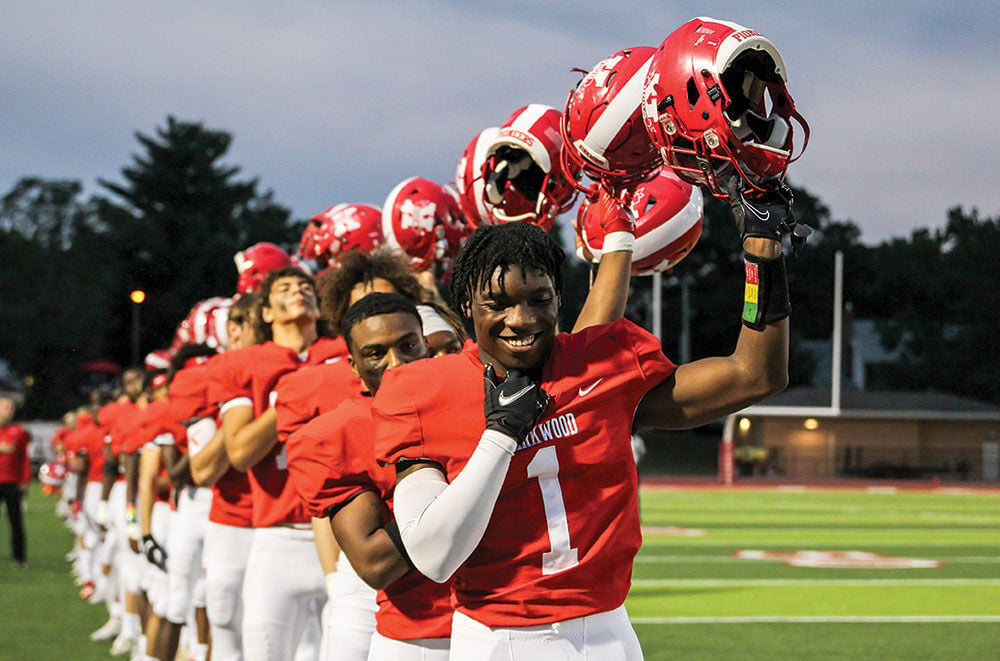 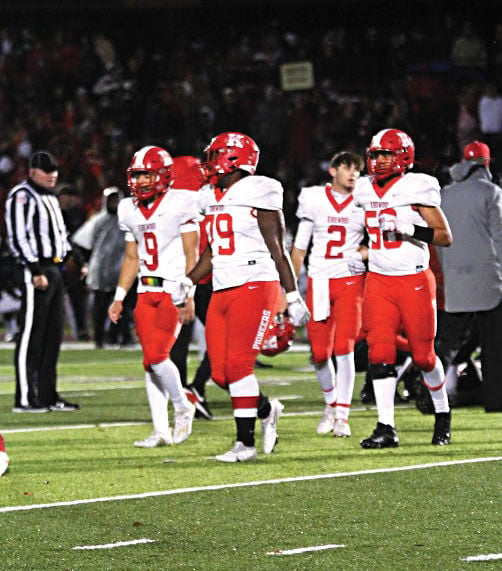 Kirkwood’s offensive line runs off the field during the district game against De Smet. The Pioneers fell short by a score of 35-7, and the team ended its season 6-3 overall. | photo by Ella Davies

For the first time since 1988, the 2020 Turkey Day game was cancelled last year due to COVID-19, but one thing remains constant — the desire to ring the Frisco Bell. For the Pioneers, this means winning the bell in front of the community  on home turf and keeping the prized possession at Kirkwood for yet another year.

The Turkey Day game has been a long-standing  tradition since 1898, bringing the communities of Kirkwood and Webster Groves together. With Kirkwood winning the past seven matchups, the Pioneers are looking to cap off their season with another win against rival Webster.

Kirkwood finished its regular season 6-3, losing in districts against De Smet 35-7. Although no longer in contention for a state championship, the Pioneers, led by head coach and former NFL player Jeremy Maclin, fought hard all season to put themselves in the best position to win.

“There are obviously a couple games you want back and you would like to still be playing right now for a chance to win a state title, but I think our kids battled all year,” Maclin said. “I thought there were a lot of unknowns coming into the season, but I’m proud of these guys, led by the seniors, and how they fought all year.”

The Pioneers started the season tallying four big wins before losing to Hazelwood Central and Marquette. With strong play on both sides of the ball, Kirkwood was able to score points on offense and hold the other teams down on defense.

“It was all about staying together as a team from the beginning to the end, and playing out through all four quarters,” said Darius Jones, senior running back and defensive back.

Kirkwood’s offense, led by senior quarterback Louis Kavanaugh, put up 48 touchdowns on the season. Running back Jones rushed for seven touchdowns, while junior wide receiver Tyler Macon was able to get it done with 13 total touchdowns. Despite missing several games due to injury, junior running back Deion Brown still dominated the run game, leading the Pioneers with 14 touchdowns and averaging 10.3 yards per carry.

Staying strong on defense is one aspect that helped the Pioneers this season. Senior Gio Vann Jr. led the Pioneers with 59 tackles, six for loss, followed by junior Patrick Fortune (56 tackles, 11 for loss, one interception), senior Darius Jones (47 tackles, one sack, one interception) and junior Gabe Walker (47 tackles, eight for losses, three sacks, two fumble recoveries). Senior Brady Nauman continuously put pressure on the quarterback with a team-high four sacks on the year.

The Pioneers were put to the test against Eureka. Trailing 23-7 with five minutes left in the third quarter, Kirkwood was able to come back with an interception from junior Kam Richardson, two touchdowns by Macon and a two-point conversion from Jones, sending the game into overtime. With Kavanaugh rushing for a touchdown and kicking an extra point, the Pioneers won 30-29.

“The Eureka game is one that sticks out,” Maclin said. “Just coming back, being down and the fashion we won in. Credit to those guys for never quitting and never stopping believing.”

On Thursday, Nov. 25, Kirkwood will conclude its season playing against the Webster Groves Statesmen in the annual Turkey Day game.

For many, especially the seniors, Turkey Day is more than just a game. It is the last time the 16 seniors will be wearing the red and white at Kirkwood’s E.L. Lyons Memorial Stadium.

“The best part is all the people, the community feel and getting to ring the bell on the field,” Nauman said. “I love to see all the red and white versus the orange and black. It’s finally the seniors’ turn to go all out on this big day, and we’re pretty hyped about it.”