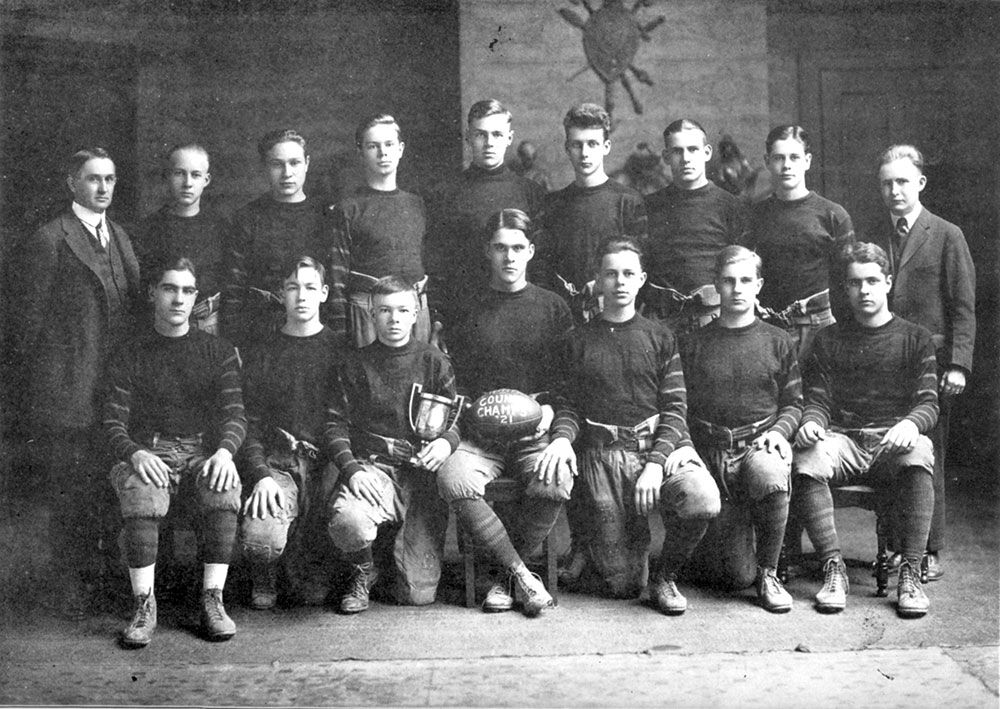 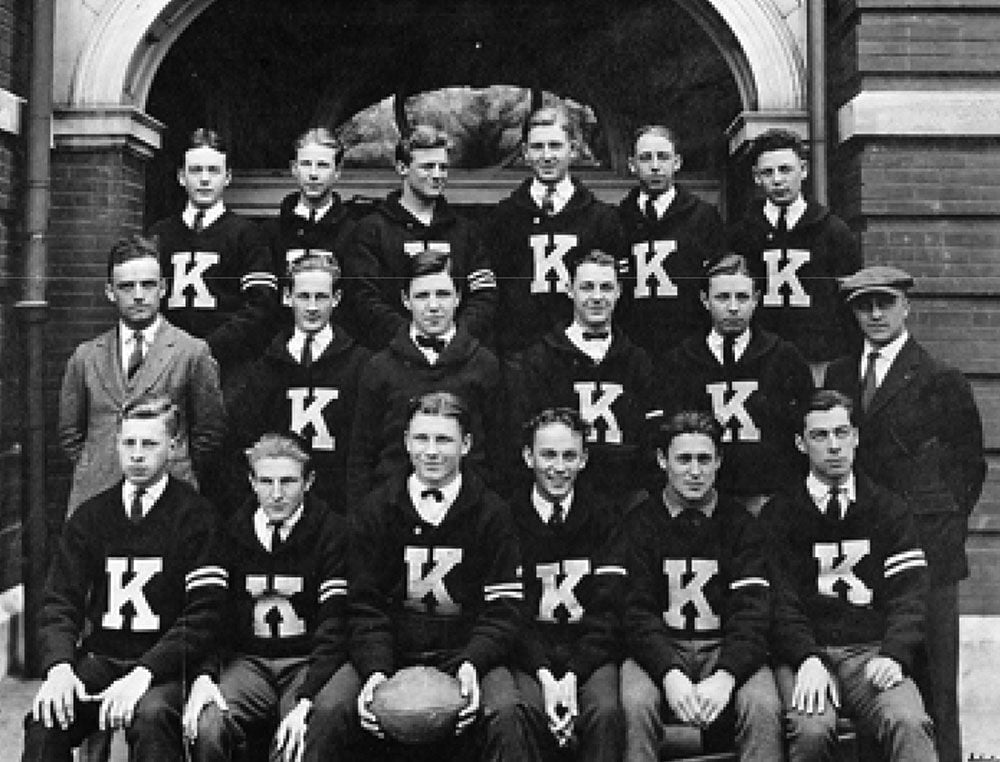 The Kirkwood High School football team held a six-point lead until late in the fourth quarter when their dreams of winning the 1921 County Championship were dashed. 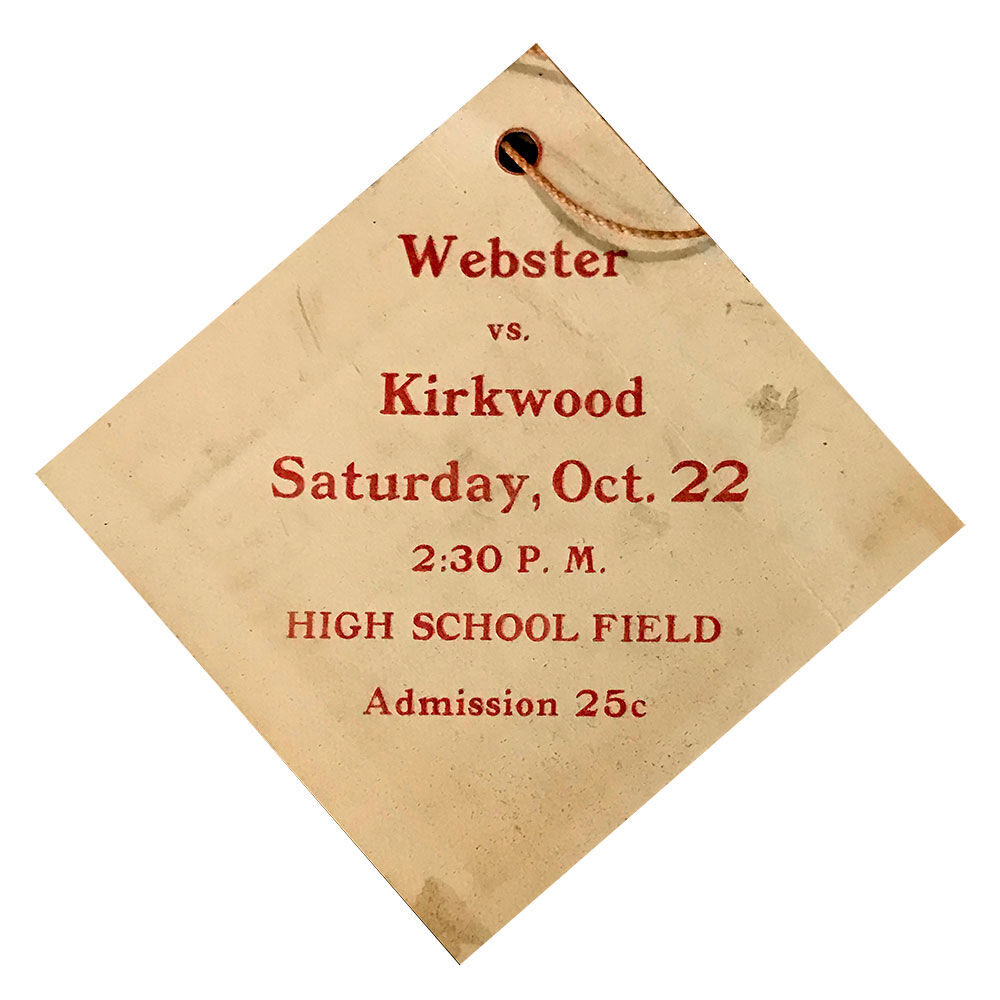 It was an odd year, which meant the game was played in Kirkwood — probably the game’s oldest tradition — on the football field behind the “new” high school, now Nipher Middle School.  Events were building to the suspension of games (which happened between 1924-1927) and competition between the schools was keen. Since 1909, the record between the schools was 7-1, favoring Webster, and the 1919 and 1920 games were both won by a single touchdown and point after.

In 1919, Kirkwood hired a prolific “footballer” as its head coach — Albert Paul John “Hap” Bernard. Webster had at its helm Charley Roberts, who took the job in 1907. The best word to describe his football coaching was “wily.”  The 1921 football game was the epitome of Roberts’  wiliness.

In the 1921 game, Kirkwood scored an early touchdown in the first five minutes on a carry by team captain Ed White. The team  missed the extra point after the touchdown.

The game had no other scoring until the fourth quarter. Harlan Gould, a 1920 Kirkwood alumnus and one of the founders of the Kirkwood Historical Society, was at the game.  In addition to many records and photos he left the society, he also gave an oral history, particularly describing the events of this game. Gould recited in his oral history:

“The new high school was built and there was quite a valley, you know, where Nipher is now,” Gould said. “They used to run the football field east and west, and that meant on the west side you were down in a hole. With a six-point lead, Webster had to move the ball 80 or 90 yards to get a touchdown, almost the end of the game ... ”

Webster had the ball on its own 20-yard line after Kirkwood turned the ball over with two minutes left in the game. It was at this time that Webster’s Coach Roberts — through his sophomore quarterback George “Jiggs” Senne — called a trick play, which the Webster Groves High School yearbook later noted “was older than himself.”

Gould described the play in his oral history: “The guy threw a pass, a short pass, over the line and a great big lumbering guy who was playing guard, he grabs the ball. He was the biggest guy of the bunch — he grabs it — and nobody paid much attention.  He started running and they finally woke up that maybe the guy had the right to have the ball ... and they start chasing him.”

Center George “Buck” Buchanan hiked the ball to quarterback “Jiggs” Senne, who made the short throw to “Cop” Copley, who had been playing guard the entire game. Copley ran just behind the front line of players, caught the ball, somehow slipped the tackle of three Kirkwood defenders and barreled down the field.

There was only one Kirkwood defender left, moving fast and on a direct intercept to Copley.  The game was now in the hands, or rather body, of Webster Groves tackle Dwight “Inkie” Ingamells, who threw his body under the Kirkwood player, halting his advance on Copley.  Copley scored and “Ferd” Stork kicked the extra point.

The touchdown was not without cost, as “Big Inkie” was carried from the field unconscious and was in bed for a day or two. “Big Inkie” later noted, “We won, so what’s the difference?”

This year celebrates the 112th varsity contest between the 123rd football teams of both schools. In varsity meetings at the Turkey Day game, Kirkwood leads the series 42-37-5. In the record of all varsity games ever played, Webster leads that series 54-50-7 which, at four games, has not been that close since 1920.

For the seventh time in the past eight years, the varsity teams will meet this Thanksgiving Day. Last year’s game was canceled due to COVID-19. Broadcast regulars and Webster alumni Jim Grillo and Damon A. Patterson bring fans all of the action on Woodland 1 Sports at www.mixlr.com/Woodland1. May the Frisco Bell ring for you this Turkey Day!