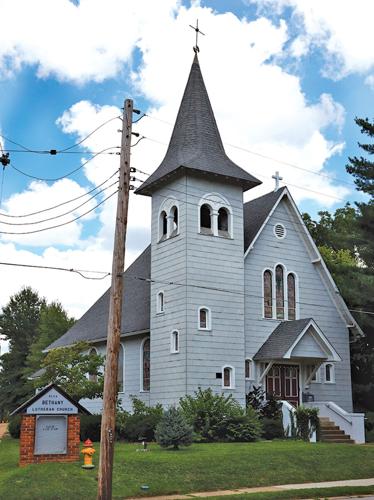 Bethany Lutheran Church, 407 Fairview Ave. in Webster Groves, was founded in 1897 by Danish immigrants. The church was built in 1904. | photo by Ursula Ruhl 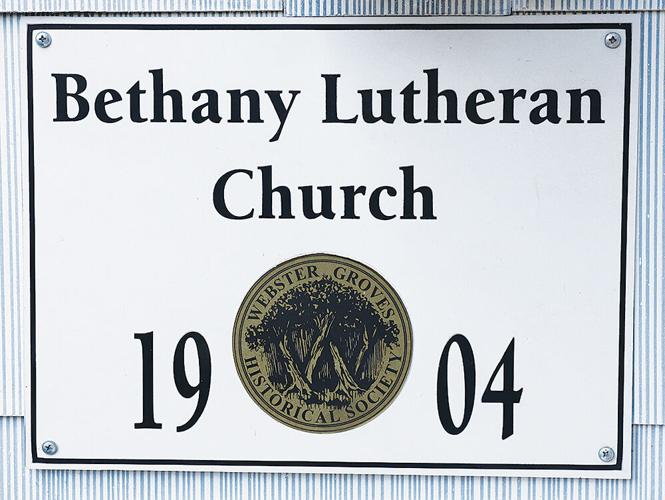 A marker outside of Bethany Lutheran Church. 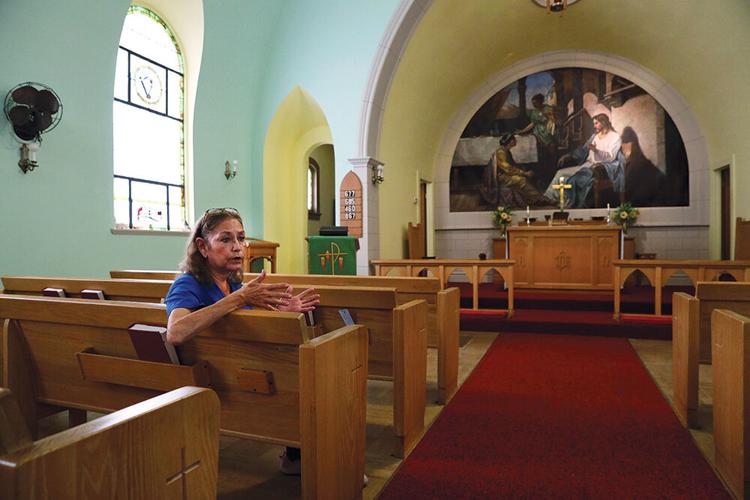 Denny Kasch, who serves as secretary on the Bethany Lutheran Church Council, said the council will take legal actions against the “takeover” of the church and its assets by the Evangelical Lutheran Church in America. | photo by Ursula Ruhl 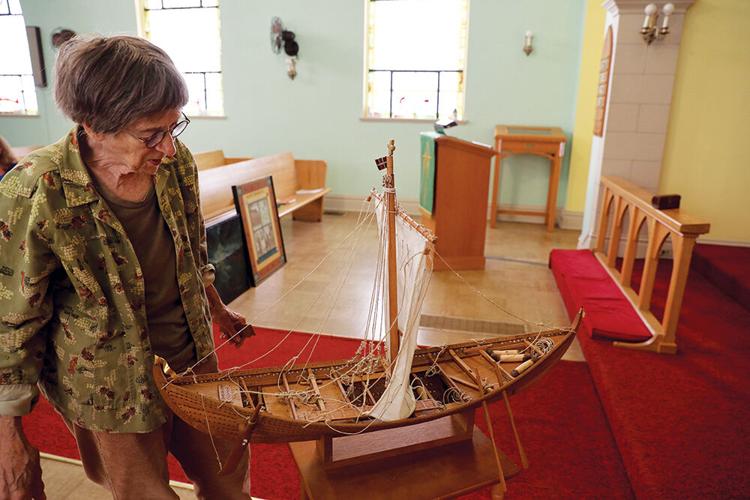 Artist Bonnie Rasmussen with her wood carving of a Viking ship. She said all Danish churches have a ship model, representative of a seafaring nation. | photo by Ursula Ruhl

Since 1904, a gray-shingle, wood-frame church has stood at the quiet residential corner of Fairview Avenue and Glen Road in Webster Groves.

But now members of Bethany Lutheran Church say they fear for the future of their small congregation, founded in 1897 by local Danish immigrants, and for what may become of their historic church building.

For some church members, bad news arrived in late June when Bethany Lutheran received a letter from its Kansas City-based governing body, the Central States Synod of the Evangelical Lutheran Church in America (ELCA), stating that the senate council had voted to close the church due to violations of both the Synod’s and Trinity Lutheran’s constitutions.

Webster Groves resident Chuck Kasch has been a member of Bethany Lutheran for 55 years, with his grandfather being a founding member. His wife, Denny, is the church’s council secretary and has been a church member for 43 years.

Denny Kasch said the congregation was told to turn over keys to the building, along with all financial records, by Oct. 1. She said the Synod is claiming the church property and all other assets as its own, which includes an adjacent residential property the church rents out. She said the double lots, coupled with liquid assets, are valued at more than $1 million.

The congregation and its council fear that the Synod will ultimately sell the property to a developer. When asked if she believed the church could ultimately be demolished, she said: “I’m thinking yes. Probably both the church and the house.”

The Rev. Susan Candea is the bishop for the Central States Synod, ELCA. She said that while the Synod is sympathetic and cares about those who want the church to remain open, the Synod has a larger obligation to the church and its ministries.

She said the Synod does not own the church, its property or its assets, but when a congregation ceases to function, as the governance of the church’s constitution requires, the Synod can step in to manage church assets.

“They (Bethany Lutheran) have not been able to be a congregation. They’re not gathering for worship, holding council meetings or annual congregation meetings to make the decisions themselves,” Candea said. “As a result, the Synod has a responsibility and our senate council steps in to make those decisions.”

Members of Bethany Lutheran Church can appeal the Synod’s decision at the next annual meeting of the senate council. That meeting isn’t until June of next year. Until then, Candea said the senate will take charge of the property on Oct. 1, 2022.

She added that a decision on the future of the church building and the adjoining house can’t be made until the outcome of the appeal is known. Candea said she doesn’t expect the senate council’s decision would be overturned.

“It’s not their fault and there’s no animosity, but it is time for them to say,  ‘We have been good and faithful servants to our congregation,’ and to look to the future,” Candea said.

But some members of the congregation aren’t ready to do that. When Bethany Lutheran’s  congregation and church council were made aware of the Synod’s intentions back in June, the council met in July and voted to remain open, according to Denny Kasch.

Church leaders are prepared to mount a legal challenge to the Synod’s “abuse of power.” Denny Kasch said an attorney has offered pro bono legal services on behalf of the church.

“This is so clearly an abuse of power and an obvious money grab by the Synod,” said Miki Bunyard, a church member and the daughter of Denny and Chuck Kasch. “Our wish, as remaining church members, is to leave the Synod and become an independent church entity, keeping our assets and property.”

For much of its long history, Bethany Lutheran Church enjoyed a healthy congregation. But by the 1980s, membership in the church began to decline. Though Bethany Church has managed to remain debt free — thanks to endowments and donations — the church has only had eight to 12 members at any one time over the past 15 years, according to Denny Kasch.

But declining numbers were not the only factor in the Synod’s resolution to close the church. Like most churches, Bethany Lutheran was forced to close its doors during the height of the pandemic. Since then, however, the church has not reopened. Denny Kasch said part-time pastor Rev. Stephen Starr suffers from polycystic liver and kidney disease, putting him at high risk should he contract COVID-19. As a result, the pastor has been reluctant to restart church services. It has been two years since in-house services have been held. As of late, Denny Kasch said church services have been held via Zoom.

Bethany Lutheran Church was built by hand by Danish members of the congregation, and the children of the church raised money to buy the church bell.

Among the church’s distinct features is the work of Danish immigrant and St. Louis 1904 World’s Fair artist  Bernhardt Ludvig Hillig. His painting  entitled, “Jesus with Mary and Martha at Bethany,” is displayed behind the altar. Church members celebrated its complete restoration in 2005.

The church also harbors a replica of a Viking ship, a common feature in Danish churches throughout the world. Church member and renowned woodcarver Bonnie Rasmussen constructed the Viking ship that typically hangs in the church’s sanctuary. Rasmussen said her grandfather, Peter Rasmussen, helped found the church.

“The railroad brought a lot of early immigrants of all backgrounds into Webster, and the Danes were among them,” Rasmussen told the Times in 2005.