Voters line up outside of the Webster Groves Public Library on Election Day. Reports from area polling places showed that voting was particularly heavy during the early morning hours, with some voters having to wait in line for several hours before casting their ballots. For more voting photos from Tuesday, see our photo gallery here. | photo by Ursula Ruhl 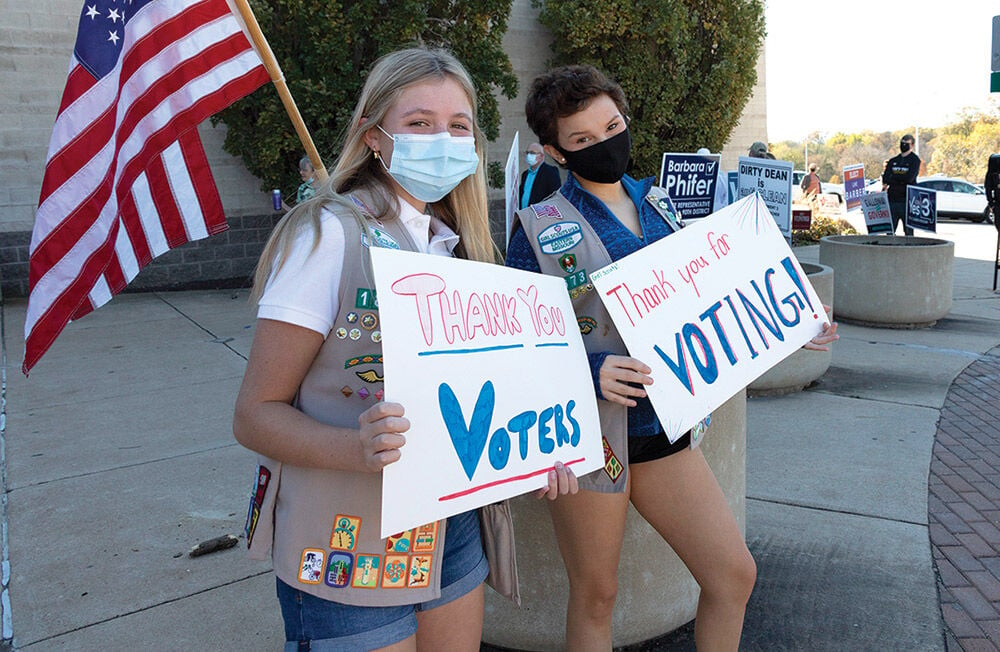 Senior Girl Scouts thank voters outside of the Kirkwood Community Center. At left is Rachel Kramme of Troop 673. With her is Maeve Heaney of Troop 1891. Both girls attend Kirkwood High School. | photo by Diana Linsley 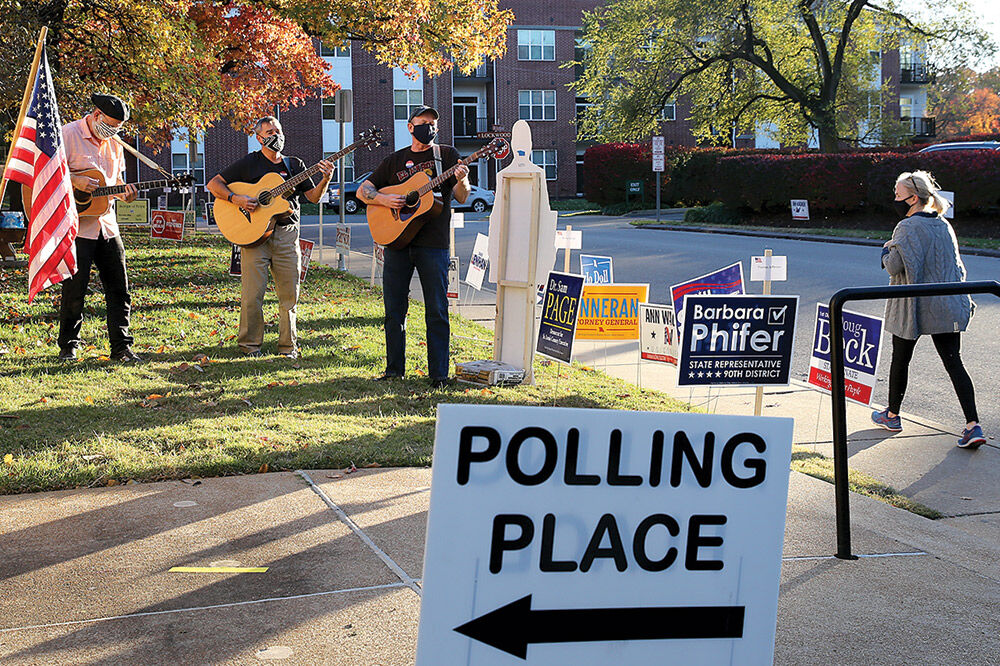 Missouri gave its 10 electoral votes to President Donald J. Trump on Tuesday. Republicans also had a good night on Nov. 3 elsewhere around the state. The GOP swept all statewide offices and gave Gov. Mike Parson a full four-year term.

As the Times went to press on Wednesday, Biden was winning the popular vote by about 3 million votes. The electoral results were still too close to call, with Biden at 253 and Trump at 213, both short of the 270 needed to win. As of Friday morning (Nov. 6), the electoral votes stood at 264 for Biden and 214 for Trump. The victory will come down to who wins the few remaining battleground states — Georgia, Pennsylvania, Nevada and Arizona.

Ballwin’s Wagner defeated Schupp in the district that takes in portions of St. Louis, St. Charles and Jefferson counties. She took 52% of the vote in the district, versus 45%  for Schupp. Wagner’s district takes in most of the Webster-Kirkwood Times area.

The district, which takes in all of St. Louis and portions of St. Louis County, ranks as the most Democratic district in the state. Bush rolled up 79% of the vote tally versus the GOP’s Rogers and Libertarian Alex Furman. Bush was declared the winner shortly after the polls closed at 7 p.m.

Republican Gov. Mike Parson handily defeated State Auditor Nicole Galloway with 57% of the vote to 41% to win a full term as Missouri’s chief executive. The vote  tally closely replicated the presidential contest voting. Voters in St. Louis County broke with the state by handing Galloway 59% of the vote.

In his victory speech, Parson repeated his campaign theme that the election was all about law and order and preventing the implementation of socialist measures by Democrats.

“This election was about preserving freedom, capitalism and the rule of law,” Parson stressed. “There is more work to be done, and that work starts tomorrow, as the next term for governor.”

Local Democrats did share some better news when it came to the state legislature. However, the overall makeup of the Missouri legislature in Jefferson City  will remain lopsided in favor of Republican officeholders.

Doug Beck, an Affton Democrat, won the 1st District Senate seat in a race against David Lenihan, a Republican from Oakville. Beck replaces Democrat Scott Sifton, who was termed out of the seat.

Republicans fared better in state legislative seats on the west side of the Webster-Kirkwood Times reading area.

Incumbent Republican Andrew Koenig of Ballwin held onto his District 15 seat in the Missouri Senate after a challenge from Kirkwood Democrat Deb Lavender. Lavender gave up her seat as the  90th District House representative to take a run at incumbent Koenig.

St. Louis County Executive Sam Page was the odds-on favorite to beat the  Republican’s candidate Paul Berry III, the Green Party’s Betsey Mitchell and Libertarian Theo Brown. He did just that on Nov. 3 with 58% of the vote.

A medical doctor, Page argued in his campaign that he was in a unique position to help get St. Louis County through the COVID-19 pandemic crisis with infections spiking recently.

Amendment 3 squeaked by for a win on Nov. 3, much to the chagrin of Democrats who contend it will allow Republicans to control redistricting and guarantee predominantly one-party rule in the state due to gerrymandering.

Opponents of Amendment 3 called it “Dirty Missouri” and described it as an attempt by the state legislature to undo the voters’ will in 2018 with their placing it on the ballot on Nov. 3.

Supporters of Amendment 3, passed by a 2% margin, argue that transferring responsibility for drawing state legislative districts to a governor-appointed bi-partisan commission is  better than what voters passed in 2018.