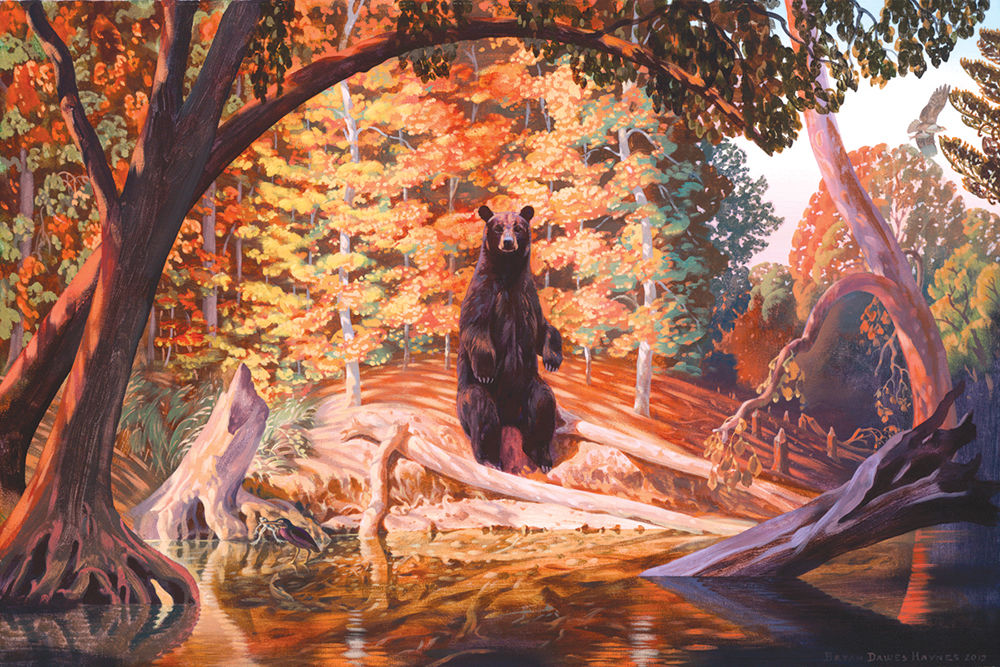 “Bears Return” by Bryan Haynes. A number of Haynes’ paintings will be on display at the Kirkwood Train Station on Sunday, Oct. 6, from 5:30 to 7 p.m. 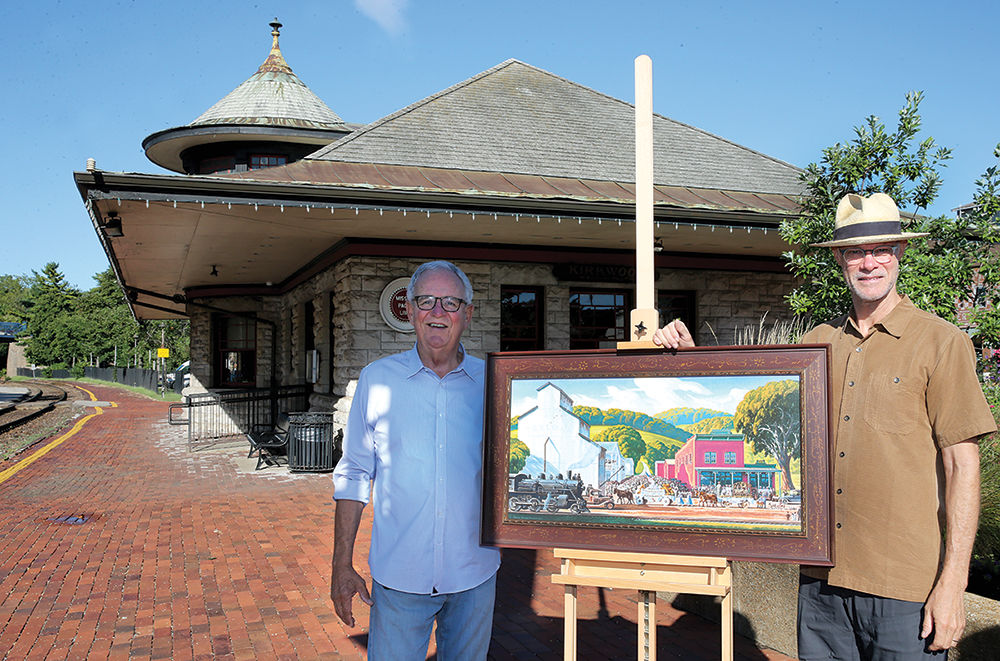 From left, Dan Burkhardt with Bryan Haynes with one of Haynes’ paintings at the Kirkwood Train Station. Burkhardt is head of Magnificent Missouri and co-author of the book, “Growing Up with the River: Nine Generations on the Missouri.” Artist Haynes illustrated the book. 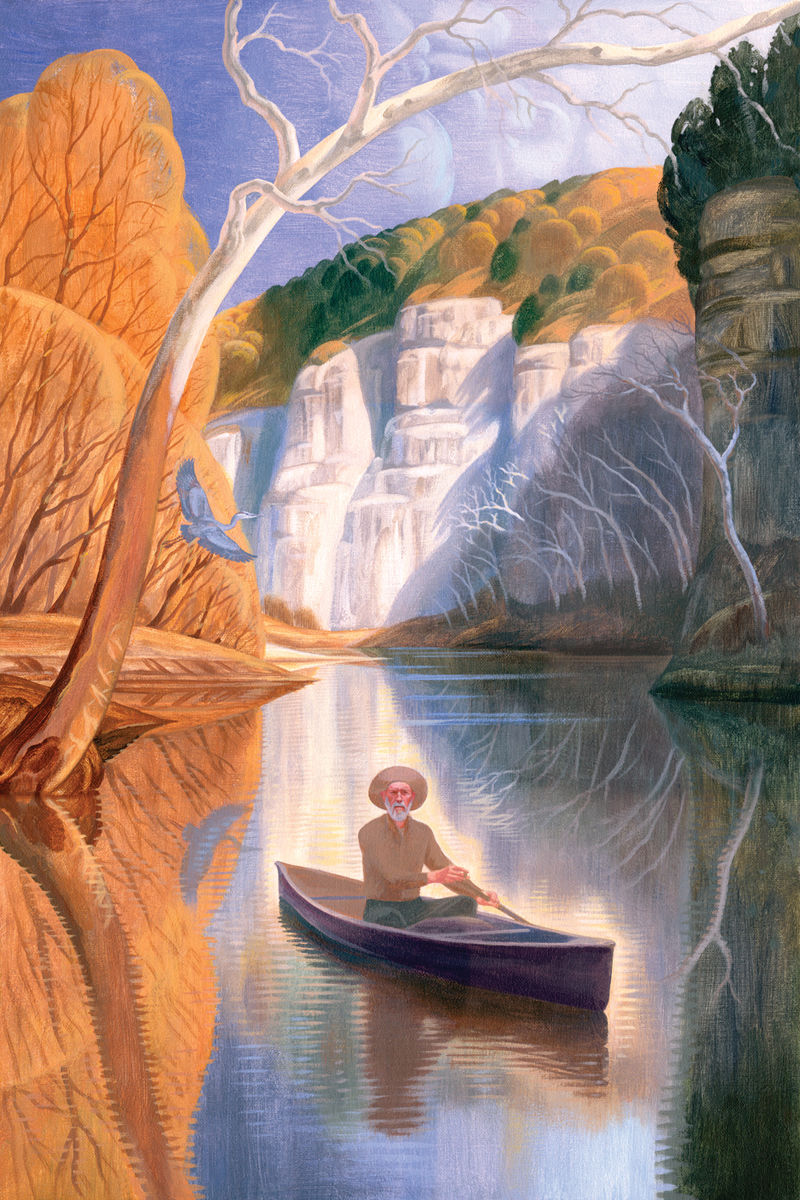 A celebration of the landscape art of Bryan Haynes, as well as the subject of his work, the Missouri countryside, will take place at the Kirkwood Train Station from 5:30 to 7 p.m. on Sunday, Oct. 6

“The Kirkwood Train Station is the railroad gateway to Missouri’s beautiful backyard, so it is completely appropriate to have a celebration here,” said Dan Burkhardt, who heads the organization known as Magnificent Missouri.

Magnificent Missouri has a mission to conserve and increase appreciation of the Katy Trail and the last 100 miles of the Missouri River Valley through education programs, entertainment events and collaborative projects.

According to Burkhardt, the last 100 miles of the Missouri River Valley constitute a unique natural corridor that includes the confluence of two of America’s greatest rivers, the beginning of the Katy Trail, the country’s longest rails-to-trail bike path, the first American Viticultural Area in Augusta and many nearby wineries.

Artist and illustrator Haynes, a 1978 graduate of Kirkwood High School, has been doing river scenery for decades. Haynes now has a studio and gallery in Washington, Missouri, a historic railroad town much like his native Kirkwood.

“We like to say that Bryan Haynes’ work is the best thing we have going to appreciate and preserve the natural and historic landmarks of the Missouri River Valley area,” Burkhardt said.

Haynes’ artwork received rave reviews in a special edition book, “Growing Up with the River: Nine Generations on the Missouri.” The edition for the 2018 St. Louis Climate Summit in St. Louis includes a forward by Peter Raven, president emeritus of the Missouri Botanical Garden.

The river book was authored by Dan and Connie Burkhardt and received the Mom’s Choice Award honoring creative excellence. The book includes coverage of 200 years of weather and climate change in the Missouri River Valley.

Many of the illustrations in the book mirror the artwork that can be found in Haynes’ Washington gallery with subjects such as: Native Americans and early settlers, rolling river hills and vineyards, migratory birds at the confluence, steam locomotives on the KATY Railroad passing through small Missouri towns.

Haynes said he loves his native Kirkwood and his adopted home of Washington, Missouri, because they are both railroad towns. They also both have scenic river hiking and biking trails: Kirkwood’s along the north side of the Meramec River and Washington’s along the south side of the Missouri River.

“One of the many great things that’s happening in Washington is that our new bridge will have a hiking and biking trail that will go north over the river to the Katy Trail,” said Haynes. “It should be open in November, and when that happens, people can bike from the train station in Washington to the Katy.

“That means people can put their bikes on the train in Kirkwood, get off in Washington, head north to the Katy, and take the Katy back to St. Louis,” Haynes said. “That will be a tremendous loop experience with river scenes, farmlands, vineyards, bluffs and valleys.”

Haynes noted that all this is coming together for the 30th anniversary of the Katy Trail in 2020. The Katy Trail is the country’s longest recreational rail trail at 240 miles in length. The trail runs largely along the northern bank of the Missouri River, in the right-of-way of the former Missouri–Kansas–Texas (MKT) Railroad.

“We are the only place in America where you can get on a train in an urban area and be in one of the greatest natural settings anywhere in the nation in 45 minutes,” said Burkhardt. “And, you can be on a trail that takes you through the premier vineyard areas of Missouri.”

There are still a few seats left for the Kirkwood Train Station event at 5:30 p.m. on Oct. 6. The event will include live music from The Country Fried Gentlemen with appetizers, Bethlehem Valley Vineyards wine and craft beer.

A second Magnificent Missouri event is scheduled for noon until 3 p.m. at the Peers Store and Treloar Mercantile near Marthasville, Missouri, along the Katy Trail. The event includes live music, old harvest equipment, tram rides and visiting historic area buildings.

“No reservations are needed for the Oct. 13 event,” said Burkhardt. “At the Treloar Mercantile you can take a picture with Missouri’s biggest ear of corn, see the historic grain elevators, and have the best hamburger on the Katy Trail at the Treloar Bar & Grill.”

When the MKT Railroad opened up in 1896, merchants built country stores along its route in towns like Treloar. Farmers had a ferry from Treloar to New Haven to carry supplies, before the fickle Missouri River changed course and decided to relocate.

Many thriving stories and businesses shuttered along the railroad tracks with the Great Depression. However, the Katy Trail is breathing new life into the area along with the efforts of Magnificent Missouri. Old stores are reopening with wine and food offerings, bluegrass music, art displays and a conservation message.

Magnificent Missouri began in 2012 as two friends — both farmers who love the countryside — discussed new ways to draw attention to Missouri conservation issues. Dan Burkhardt (Bethlehem Valley Farm & Vineyards) and John McPheeters (Bowood Farms & Garden Center) realized that the best way to entice Missourians to focus on the rural landscape around them was through conservation celebrations that feature local food from award-winning chefs and vineyard products.