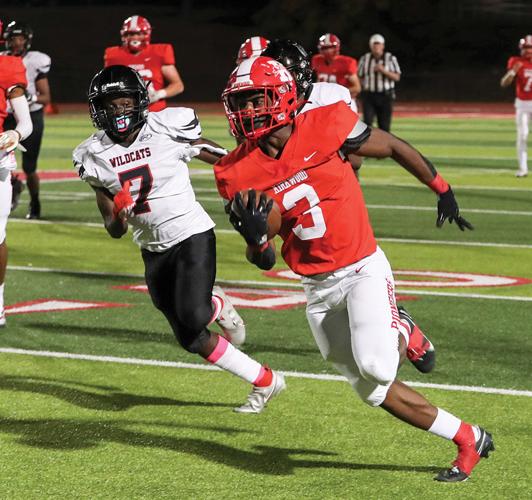 Kirkwood High School senior Deion Brown runs past a Hazelwood West defender to score a touchdown during the game on Oct. 21. | photo by Will Huster 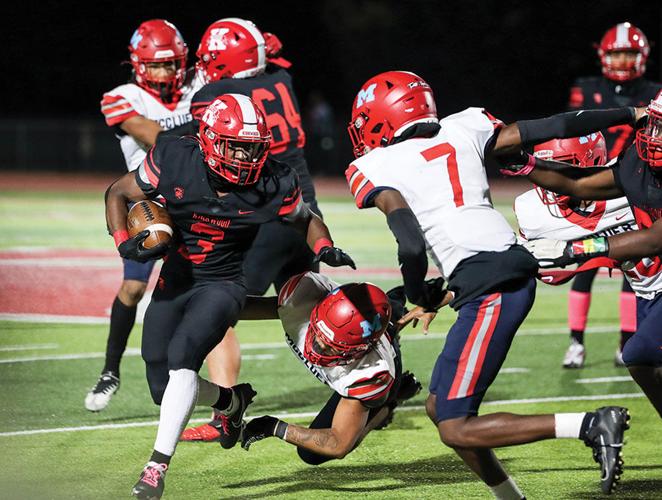 Kirkwood High School senior Deion Brown runs through the McCluer defense on his way to scoring a touchdown during a game on Oct. 14. | photo by Will Huster

With 124 years of tradition and one of the fiercest high school football rivalries on the line, the communities of Kirkwood and Webster Groves await to see where the Frisco Bell — the coveted prize for the winning team — will make its home for  the next year.

For Kirkwood, this would mean a ninth consecutive Turkey Day victory to end the season. For Kirkwood’s Deion Brown, senior running back and University of Eastern Michigan commit, it’s another chance to keep the tradition alive. And yes, yet another opportunity to “beat up” Webster — in a friendly way, of course.

“The best part about the game is the rivalry, the tradition and the opportunity behind it,” Brown said. “It’s an honor. Most people don’t get the chance to come back and play after losing in the playoffs. I’m most excited about getting one more chance to ride it out with the guys.”

Kirkwood finished its regular season 6-4, losing in the second round of districts to the CBC Cadets 41-3. Despite the loss, senior linebacker Khalil Webb said it was the biggest game of the year and a great opportunity for the Pioneers to see where the team stood against the defending state champions.

“There was so much hype around the game all week,” Webb said. “It was exciting to have the chance to play a big football school and see how we matched up against them. We had nothing to lose, so the mentality was to go out there and give it our all.”

The Pioneers, led by Kirkwood High School head football coach and former NFL wide receiver Jeremy Maclin, started off the first five games going 2-3, losing to both Vashon and Eureka by only one point with seconds left in the game. Instead of dwelling on the losses, Brown said Kirkwood used these games as a chance to learn and grow for the upcoming matchups.

“The team was a little down about it, but there was nothing to be down about because we were right there,” Brown said. “It was a lack of certain things that didn’t let us finish the games we wanted to. We went in, figured it out and that translated to the rest of the season. When things were good, they stayed good.”

From that point, the Pioneers went on to win the last three games of the season, only allowing two touchdowns. Coach Maclin admired the fight the Pioneers put up throughout the season.

“One word I would use to describe this team is ‘resilient,’” Maclin said. “We are a team that didn’t close out a couple of games early, but the season was not done there.”

Kirkwood’s offense, led by senior  quarterback Omar Hopkins and junior quarterback Creighton Wise, averaged 38.4 points per game and put 50 touchdowns on the year — 27 of which were scored by Brown.

Kirkwood will end its season playing against the Webster Groves Statesmen  in the Turkey Day game at Moss Field on Nov. 24. The game kicks off at noon. Maclin, who has now both played in and coached the game, said the Thanksgiving Day game means a lot to the community.

“There is a lot of rivalry and tradition in Turkey Day,” Maclin said. “It is something that if you get a chance to participate in, you take pride in it for sure.”

For seniors, Turkey Day is the last game they will play as members of the Kirkwood football program. The Pioneers hope to end the season on a high note with a victory over the Webster Groves Statesmen not only for the senior class, but for the community.

“Being a part of Kirkwood football means being a family,” senior linebacker Webb said. “Having grown up with these people and all of us coming together has been great, and has created a sense of unity. For the last five or six months we have been together for two hours, six days a week, doing something we all enjoy. Turkey Day is our last chance to play, bring the community together and get a win.”

Kinley Bokermann is a senior at Kirkwood High School and is an editor-in-chief for the student newspaper, The Kirkwood Call.