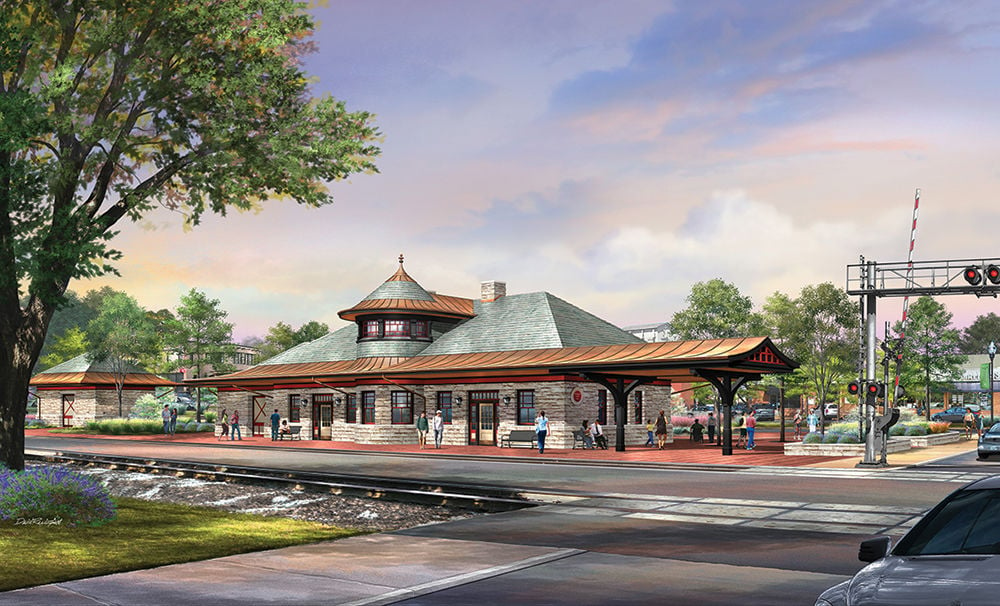 This architect’s rendering of exterior renovations to the Kirkwood Train Station show the addition of a new building to the west of the station (far left), to be used for storage of luggage and other materials. A new platform roof will extend beyond the building on the southeast side. 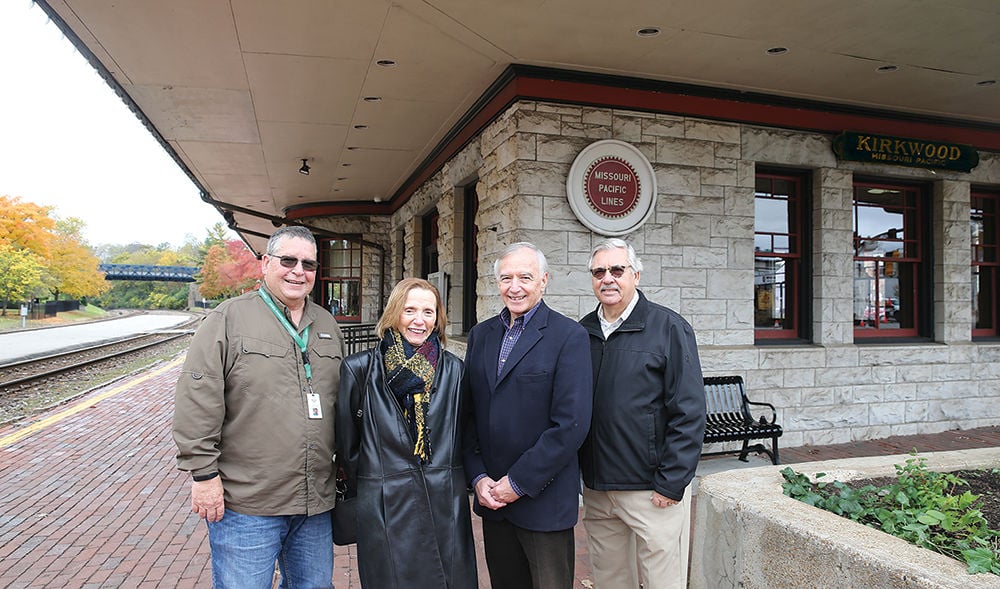 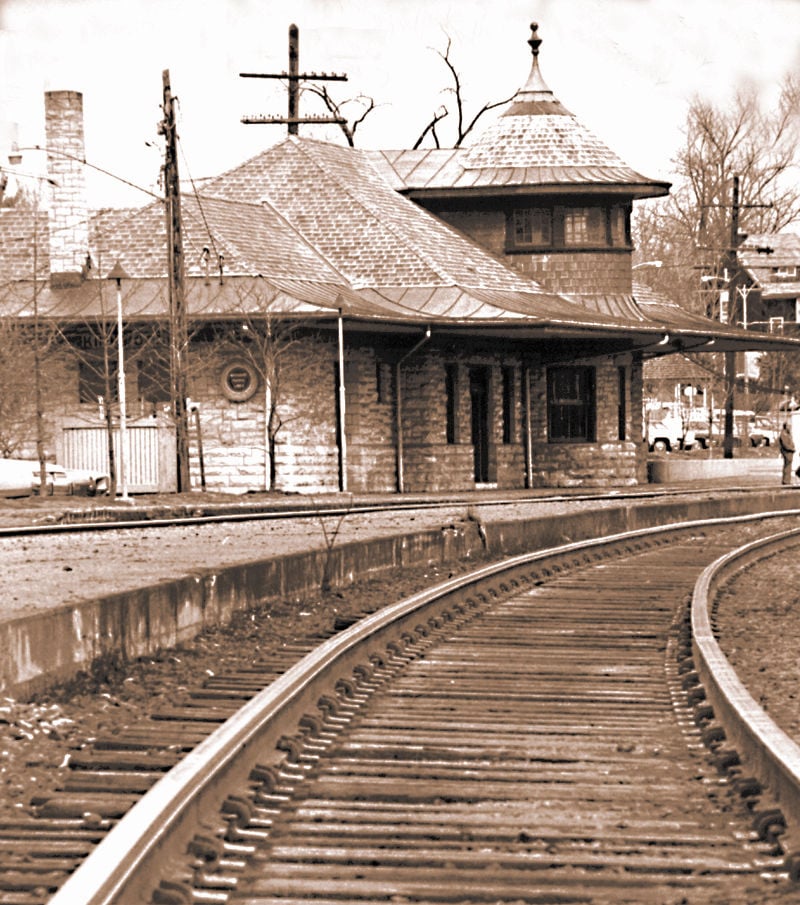 If you’re “gonna take a sentimental journey,” you could hardly do better than two upcoming open houses at the Kirkwood Train Station this month. Local architect Donald Hussman will give a presentation on the past, present and future of Kirkwood’s railroad icon.

It’s all part of the kickoff for a fund drive to repair and update the 126-year-old landmark that is the third busiest passenger train stop in Missouri. The open houses, scheduled for noon to 3 p.m. for two Saturdays, Nov. 16 and 30, are courtesy of the Kirkwood Train Station Foundation.

“This is not just about preserving the station, this is about preserving memories,” said Art McDonnell, past Kirkwood Mayor and a Train Station Foundation member. Other members are Hussman, Mike Brown, Trace Walls, Bill Burckhalter, Donna Poe, Todd Neu, Jim Wright and Barb Byerly.

“We have been collecting comments and memories about the station as we get ready for these events,” said McDonnell. “Our hope is to have these recollections posted on the walls at the station, so that visitors can see the incredible legacy of this place and the role it has played.”

Some of those recollections include the time President Harry S. Truman arrived by train in Kirkwood, or the era when a passenger depot canopy was attached to the station, or a past when citizens helped push an adjacent railway turntable to send engines back into the city after coming to Kirkwood.

The plans for refurbishing the station add something new to the site, as well as a throwback to the past. For example, an attached passenger platform roof will be constructed at the southeast corner of the station.

A new ancillary building is planned for the west side of the building and will provide storage for equipment, materials and luggage now kept in the bagroom of the station.

The new building will use the same stone – to provide the same look – as the train station. Stone blocks for the old station were mined from rock at the old Meramec Highland Quarry, or what today is known as Dee Koestering Park off of Marshall Road.

“Geologists from Missouri University of Science and Technology at Rolla have located the exact rock vein where the old stone came from,” explained Hussman. “So we are going to use original material from a quarry that has not been mined for many years to make this right.”

Critical needs for the station include a new roof, tuckpointing, lighting, ADA compliant restrooms, a new HVAC system, as well as the storage building and the outside platform shelter.

The Federal Railroad Administration (FRA) will unerwrite the cost of a new ADA-compliant platform and digital train schedule signage for a total value of $3 million in upgrades to the station.

The city of Kirkwood’s portion of cost is $700,000 for site improvements to address stormwater damage, to redesign and rebuild the parking lot, to provide a temporary modular station building and to cover transitional costs during construction.

The Foundation committee has been answering questions about the funding needs, even before the official campaign drive begins later this month. Among the queries: Since Kirkwood owns the station, why doesn’t the city underwrite the whole campaign?

The answer to that question is that the scope of the combined restoration and renovation project is significantly beyond the typical facility maintenance addressed by the city’s general fund.

Another question that pops up: Since a capital campaign was not required for the new Kirkwood theatre, why is it needed for the train station?

McDonnell pointed out that the Kirkwoood Performing Arts Center falls under the parks department, and is funded by a bond issue backed by a parks-dedicated sales tax.

Other questions revolve around how the city came to own the historic train station in the first place.

In the summer of 2003, Amtrak told the city that it was closing the station. The city administrator at that time, Michael Brown, collected the keys and announced the station would remain open. Kirkwood bought the station and adjacent property in December 2003.

“We have so much to thank Mike Brown for,” said Barb Byerly. “He kept the station from getting away from us. It has become a symbol of the city, and a model station that passengers from all over the country talk about.”

Since its purchase by the city in 2003, station manager and part-time city employee Bill Burckhalter and his staff of volunteers have kept the station running. They volunteer more than 6,000 hours per year and their efforts receive national transportation awards.

“When I look at our volunteers and all the hours that they put in, I am very optimistic that the campaign fund goals to refurbish and update the station are going to be met,” said Burckhalter. “The station does get cold and I am sure our volunteers will appreciate a new heating system in the coming winters.

“This station has become a real event location since the city took it over,” added Burckhalter. “It hosts community meetings, holiday parties, art events – so it is much more than a passenger station. That’s part of the fun and magic of the place.”

A part of the magic of the place is its solid Richardsonian Romanesque architecture. Also magical are those rustic, two-foot thick stone walls – and if they could talk, what stories they could tell from more than a century of travelers, visitors and revelers.

An amazing aspect of the station is that its walls do not shake — even after thousands of heavy coal trains have passed by for scores of years. McDonnell is most impressed by the unshakeable memories that come out of the place.

“I hear people talk all about how their granddads took them here to see the trains,” said McDonnell. “And those people will give their own grandkids that experience some day. Those grandkids may get their first ride on the train from this station.”