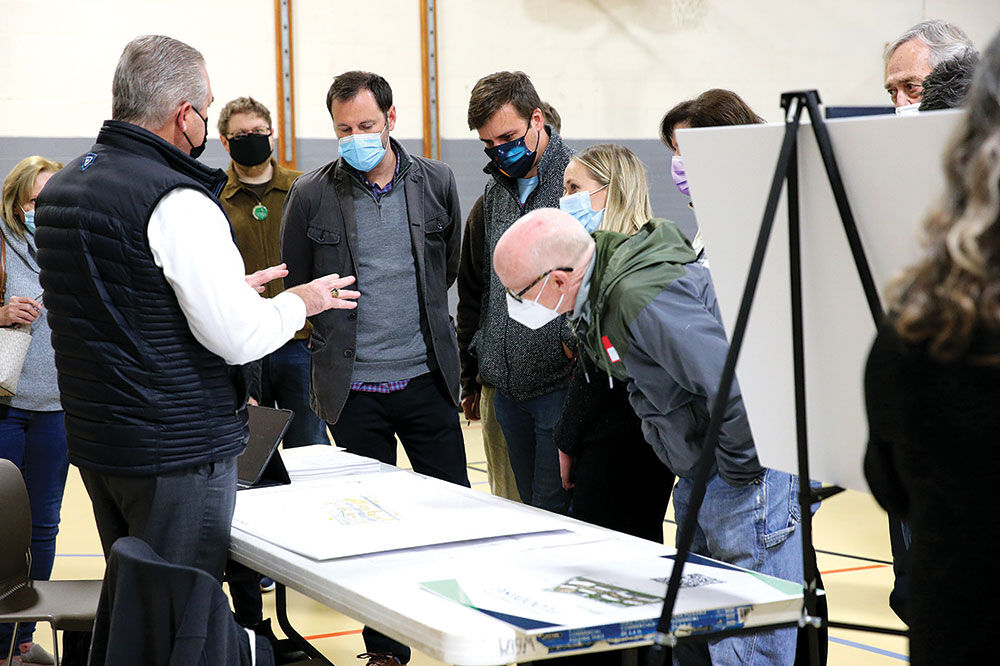 George Stock of Stock and Associates Engineers, Inc., speaks with attendees at the Nov. 30 information session on the Douglass Hill redevelopment proposal. Stock explains plans for flood remediation on the property, part of which lies in a flood plain. | photo by Ursula Ruhl 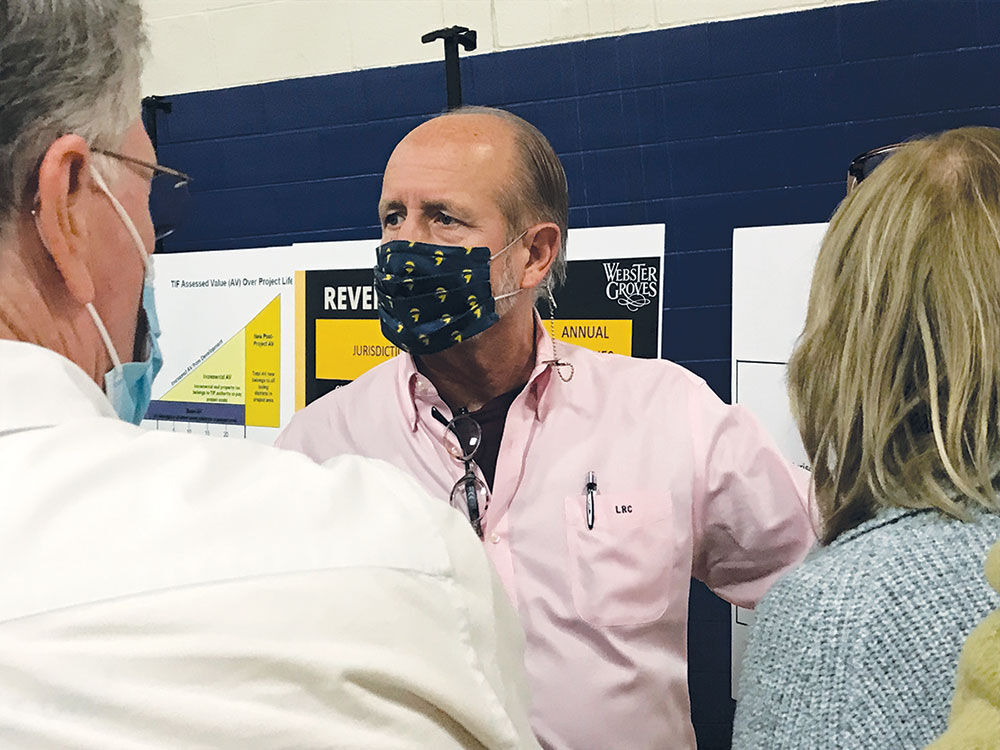 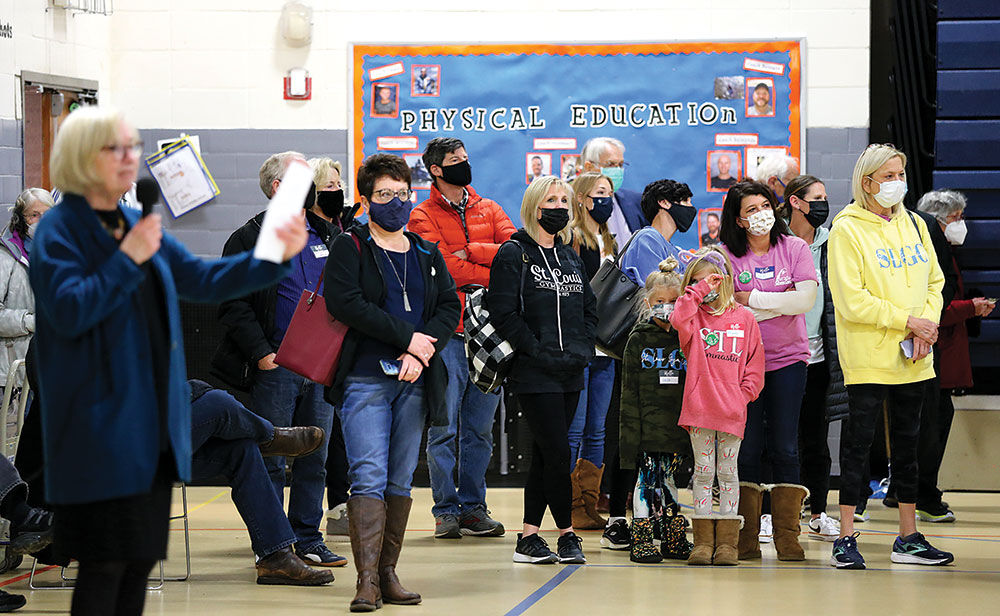 It was in February 2020 that the Webster Groves City Council chose a developer for 15 acres of “underutilized” land north of the Old Webster shopping area.

At the time, City Attorney Neil Bruntrager said the selection of developer SG Collaborative marked the beginning of a long community conversation that would take several months to complete. That long conversation — 20 months in all — is expected to culminate on Tuesday, Dec. 7, when the city council is poised to determine the fate of the ambitious $320 million mixed-use project.

The Webster Groves City Council on Nov. 2 held its final public hearing regarding the zoning change request for Douglass Hill. Residents were given one more opportunity to discuss the project with city representatives and developers at a Nov. 30 information session held at Hixson Middle School.

Chapman said on Tuesday that he is well aware that a Dec. 7 vote by the council in favor of rezoning and TIF does not guarantee the future of Douglass Hill. An initiative petition toward a public vote on the project — similar to voters rejecting the $60 million Mills Properties project in 2004 — could result in the demise of Douglass Hill.

“It’s entirely possible and that would be a crying shame if that happened,”Chapman said. “I think this is the best thing to happen to Webster Groves in decades. I’ve lived in Webster for 30 years, and for 30 years the city has tried to get that property developed.”

Beginning in April 2020, the SG Collaborative development team held the first in a series of three virtual town hall meetings to seek public input on what citizens  wanted to see in the development.

“Based on your questions and comments, we can then start to formulate a game plan,” Chapman said  at that first meeting. “We want to create a palette of options that will help us all come together to create an environment that people feel good about. I think we are going to have many options that the community will embrace.”

Despite Chapman’s optimism, a large part of the Webster Groves community did not come to embrace “the big idea” of Douglass Hill.

From the onset of the proposal, critics voiced a myriad of concerns at public hearings, in letters to the editor and on social media — Douglass Hill is too large, too dense, and will add too much traffic to bordering streets and neighborhoods. There were also environmental concerns involving Shady Creek, and the possible use of eminent domain on existing businesses. Many people also questioned building on property that lies, in part, in a flood plain.

Opponents organized, created yard signs and “Save Shady Creek” buttons. They even attempted to end the development by amending the city’s charter by public vote. The city rejected that effort, saying it violated both the city charter and state law.

Despite the adversity, developers did not scale down their plan, saying density is needed if Douglass Hill is to be economically viable and if diverse housing options are to be included.

Anne Yard lives on Oak Street, located on the west side of Rock Hill Road and adjacent to the proposed development. She spoke to the Times in October of 2020.

“I think individually, people may have different concerns, others with a single concern, but in general when we’ve been talking, the primary issues are regarding the mass and density of the project, the environmental impact, traffic and safety, and then just the issue of affordable housing being such a small percentage of the project,” Yard said.

The development calls for a mix of apartments and condominiums, commercial retail and office use — all in eight, seven-story buildings. The plan also includes a main street, single-family town homes, an outdoor gathering space, green space and a river walk along Shady Creek.

An important aspect to the developer’s proposal is “workforce housing.” Ten percent of the residential units will be affordable to those making roughly $42,000 a year.

“Our goal is to have all the street energy of an urban environment mixed with the historical, single-family home and historic home environment of Webster Groves. We also want to create a gathering place connecting all Webster Groves residents and visitors alike. A place people want to be,” Chapman wrote in his zoning application.

The boundaries for the SG Collaborative redevelopment plan are West Kirkham Avenue to the north, North Gore Avenue to the east, Rock Hill Road to the west and the railroad tracks to the south. The current site is comprised of businesses, light industrial and residential. The Old Community Baptist Church will remain.

Five public hearings before the plan commission on rezoning the property to planned commercial ended in a tie vote on Sept. 13.

The TIF Commission, in an 8-4 vote on Nov. 23, recommended to the city council the developer’s request for $35 million in tax increment financing to help pay for the project. The city council held four public hearings in October and November.

While a final vote from the council is expected on Tuesday, Dec. 7, City Manager Marie Peoples on Tuesday night suggested that a Dec. 7 vote was not a certainty. The council is scheduled to meet one more time before the end of the year on Dec. 21. The council must vote on the TIF aspect of the project by Dec. 31, prior to a new state law that  prohibits TIFs in flood plains.