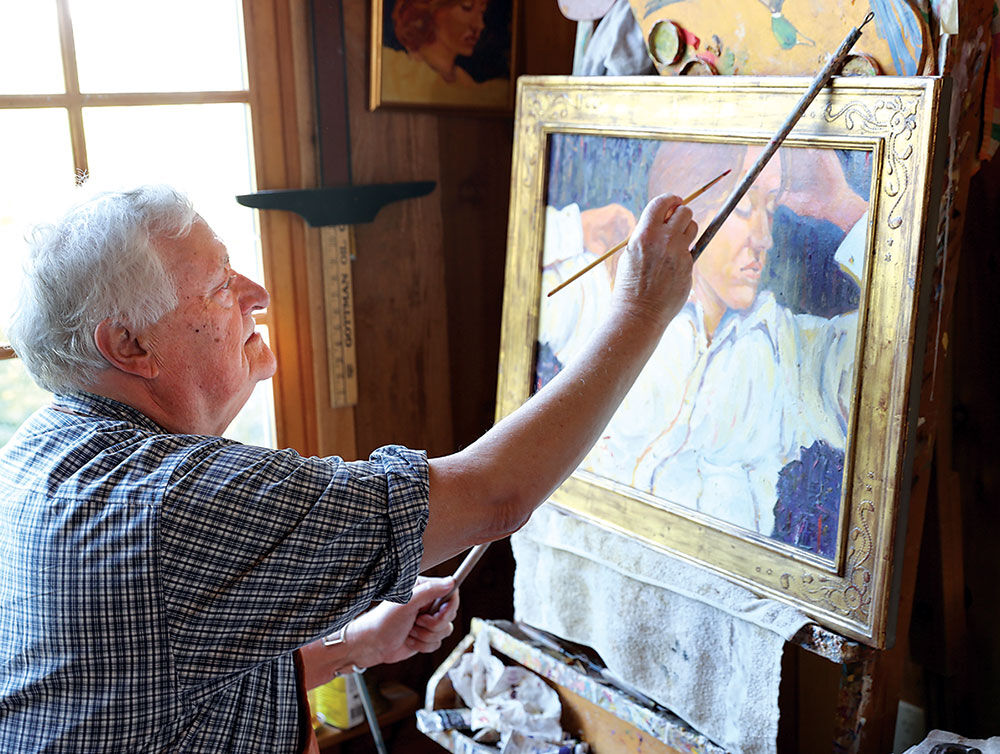 R.H. “Bob” Dick paints in his Kirkwood home studio. For the past decade, Dick has been involved in a group called Creativity and Madness, which studies the link between art and science. | photo by Ursula Ruhl 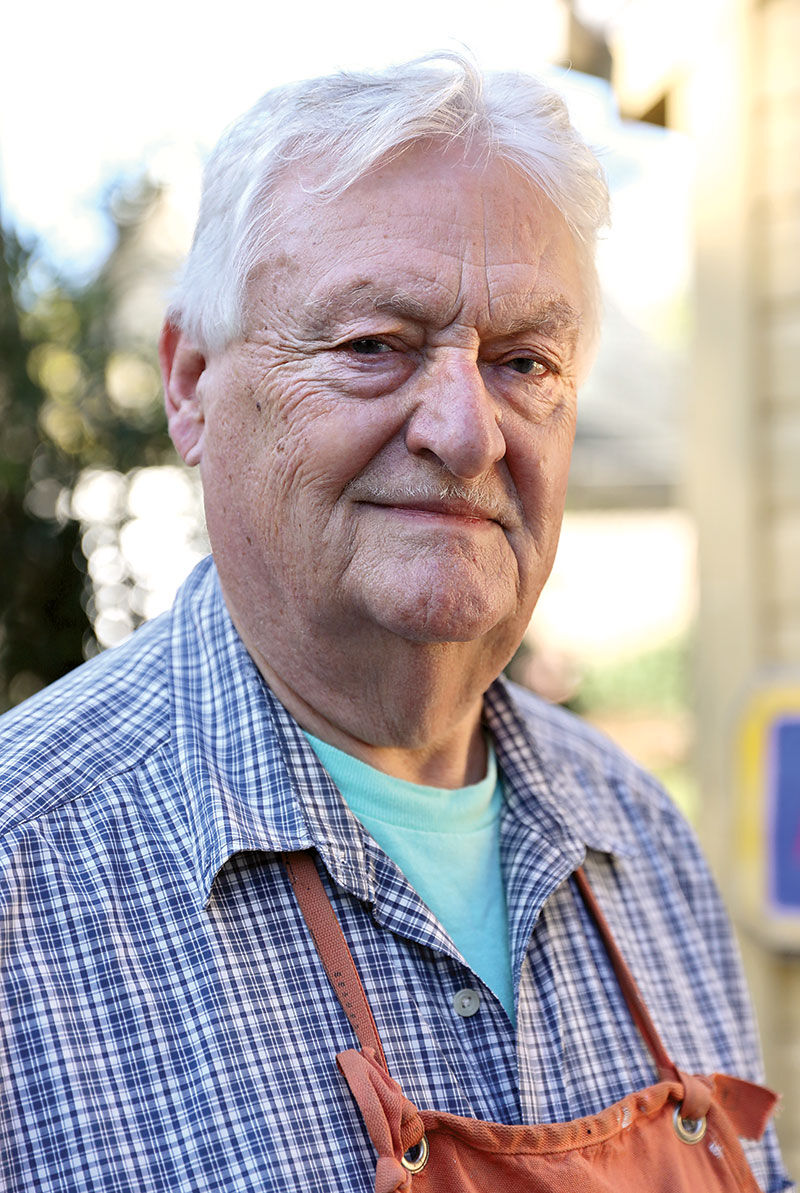 From abstract paintings on cave walls to modern music gracing the airwaves, human beings have been driven to create since the dawn of time. But what is it about making art that serves as a balm for some and a diving board into psychosis for others? Bob Dick of Kirkwood doesn’t have the answer, but he’s willing to take a crack at it.

For the past decade, the artist — known professionally as R.H. Dick — has been involved with Creativity and Madness, an organization founded by Yale psychiatrist Barry Panter, which seeks to study the link between art and science. The group has published three volumes of psychological case studies since its inception in 1981, and the latest features a section by Dick himself.

“These cats are fascinated by the artist because most of them are quantifiers. They’re scientists. They’ve been saddled with numbers and the scientific method since the Renaissance,” said Dick. “Guys like me come in here and we talk about the vibe, the juice, the things from beyond. They just look at us bug-eyed. It blows their minds.”

The “cats” of Creativity and Madness run the scientific gamut from neuroscientists and physicists to brain mappers and surgeons. The group holds regular conferences to hear from artists, including Dick, about what drives them to do what they do.

“There’s power that art has that modern man is just beginning to realize,” Dick said. “What is it about art that we just seem to be drawn to? It’s that power that hasn’t really been analyzed yet. We know that art changes the brain, but we don’t know why — and that’s why they’re intrigued.”

Dick’s section in the latest volume of case studies is about his time in the artist colony of Taos, New Mexico. Visiting for the first time at age 12, Dick felt an unexplainable force in the surrounding pueblos and returned to Taos numerous times over his career.

“How to describe Taos to a civilian? Anything goes. Artists, poets, freaks, snake handlers, outlaws, motorcycles, dropouts, drop-ins, gays, lesbians. Everybody is on a quest. Everybody is trying to find the center,” said Dick. “If you’re a searcher, if you’re an artist or poet, then Taos has an attraction that  will grab you around your throat and not let go.”

Dick’s introduction talks about a zone in the creative process where time and space are broken. Artistic genius, he said, is determined by how long one can exist in that zone.

“I’ve talked to other creators and we all agree that if you, in your lifetime, can produce one or two great things, it’s at that point that you’ve jumped into madness,” he said. “What’s happening in that flow is that logic has dropped to the floor. Rationalism is gone. You’re dealing with ethereal, mystical things.”

Dick experienced this mysterious phenomenon several decades ago while working with artist model Andrea Paulette, whom Dick calls “a true muse.” Dick worked with her for several years creating paintings, sculptures and photographs. What he considers his best work — a sculpture of Paulette — was created in a beer and aspirin-fueled haze.

“She’d come in in the morning and take the pose, and I’d work,” said Dick.  “After seven days and seven nights, I’m coming apart. She looked at me and she said, ‘What’s wrong with you?’ And I said, ‘I can’t do any more.’ And she walked out of here and that was the last time I saw her.

“While she was sitting there and I was working, I had gone over the edge,” he continued. “When that came to an end, I went into a depression. I went into a sulking, gloomy life. I didn’t know what was wrong with me. I had given so much. I was empty.”

While Dick was ultimately able to rebound from his madness, he said others aren’t always so lucky. Like the famous unraveling of painter Vincent Van Gogh, Dick has encountered artists who weren’t able to come back after falling off the edge — sometimes to the point of suicide.

To this day, Dick hasn’t parted with the piece he created with Paulette all those years ago.

“I’m proud of it, but at the same time I’m not so sure I did it,” he said. “Some of my best things came from beyond. Is that madness? It may be.”

To learn more about Creativity and Madness, visit www.creativityandmadness.com.

The Life and Times of R.H. Dick

Born in 1943, Dick had a childhood of “unparalleled freedom.” His father, a violin prodigy, moved the family to a farm in Cass County, Missouri, when Dick was a child.

Dick said his father, whom he now believes was bipolar, suffered from regular bouts of depression and was very aloof as a result. As his family made a living selling eggs, Dick turned to art to entertain himself, sculpting rocks and pond clay.

Though he did attend college — studying psychology, American history and economics — most of Dick’s art education came from training under other artists, including portrait and mural artist Bettina Steinke. Over his artistic career, he’s been a street artist, displayed pieces in sold-out gallery shows, taught portraiture and written seven books.

Dick moved to Kirkwood in the 1970s, and in the 1990s built a shop behind his home, which served as a production hub for his professional works for the next few decades. It’s now full of his favorite works and current projects. He advertises mostly by word of mouth.

Dick has artwork in galleries all across the globe, but to view his work in person, residents need look no further than the Kirkwood Performing Arts Center, 210 E. Monroe Ave. His works are displayed on the first floor near the event space.