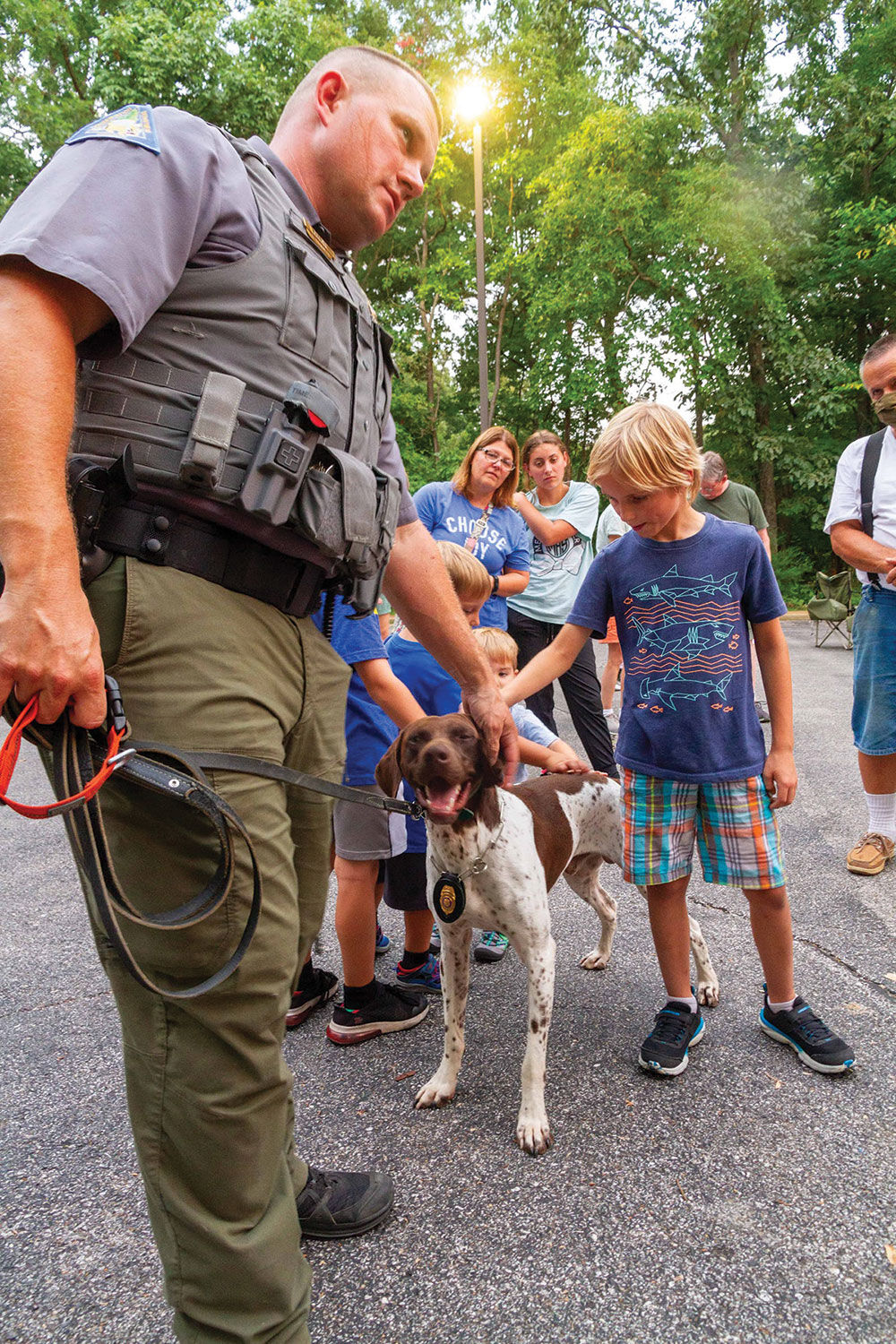 Canine Tex receives attention from the crowd at a recent presentation at Powder Valley Conservation Nature Center in Kirkwood. Accompanying him is handler 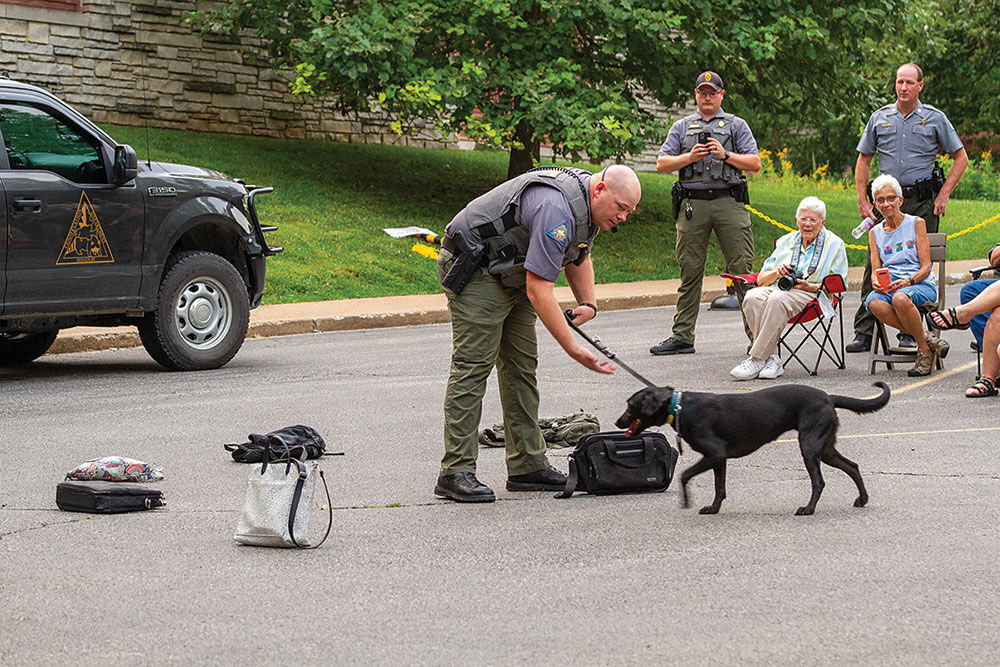 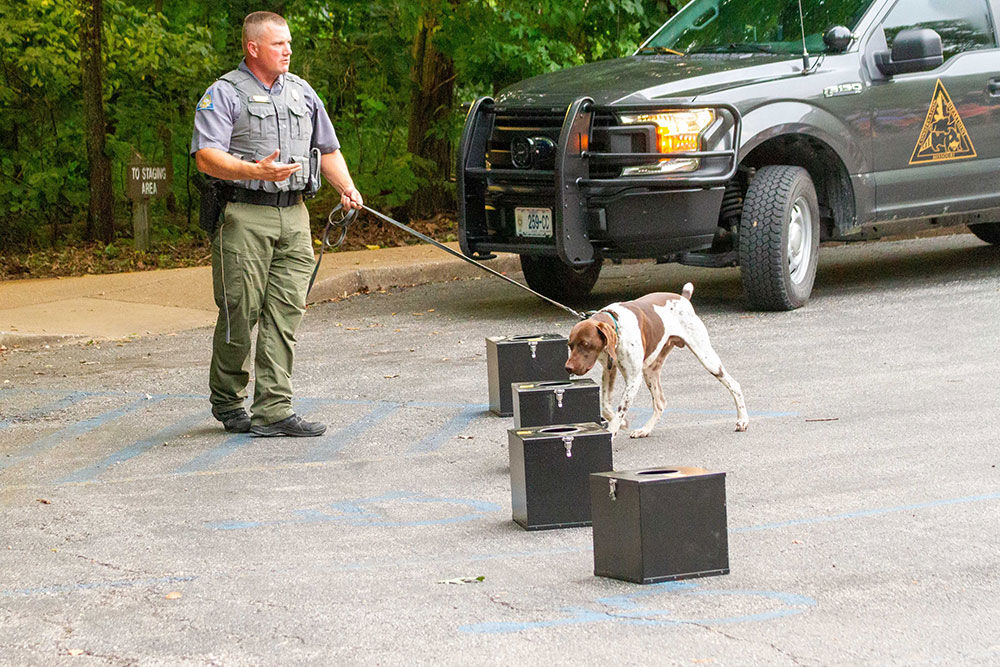 Corporal Alan Lamb demonstrates Tex’s searching abilities by hiding a bag of turkey in one of four black boxes. | photo courtesy of the Missouri Department of Conservation

The Missouri Department of Conservation recently welcomed five enthusiastic new recruits to its team. These young agents are tasked with tracking poachers, recovering evidence and enjoying the occasional belly rub.

Five dogs and their corresponding handlers form the Missouri Department of Conservation’s Protection Branch Canine Unit, which launched this summer. The program aligns Missouri with the 36 other states already using canines in conservation efforts.

“I drew the short stick and got a pointer — at least that’s what the lab people will tell you,” said Lamb. “There’s only one thing that canine handlers can agree on, and that’s that the third handler is wrong.”

Corporal Don Clever, stationed in Marion County, was also at Powder Valley with his partner, Penny the black lab. Clever explained that labs and pointers are ideal for the canine unit because of their instincts as trackers.

“The reason police departments pick dogs like German shepherds is because they’re herding dogs. They naturally nip at sheep or cows, so when they train them for apprehension of criminals, they bite,” said Clever. “With game dogs or sporting breed dogs, they naturally find things. That’s why we looked for sporting breed dogs. They are not trained for apprehension, but they are trained for tracking people, tracking violators, and search and rescue.”

As part of a demonstration, Clever placed a bullet casing in a grassy patch. Within a few minutes of sniffing around, Penny laid down in the grass, her snout acting as an arrow to guide her handler toward the casing.

According to Clever, canine unit dogs are trained to track and search in several different ways. While they are able to track human scent — making them excellent for finding illegal hunting hideouts — they are also trained to follow ground disturbance, or upturned earth and grass, to find fleeing criminals or track missing persons. They’re also taught to find anomalies — objects that shouldn’t exist in a setting, such as a gun in the wilderness.

“If the cops are on their tail, that shell casing might be the key piece of evidence,” said Lamb. “If someone says he didn’t do it, but he’s got a gun next to him — if a canine can find that shell casing to tie them together, that strengthens the case.”

The dogs learn when it’s time to perform which task through equipment association. When their handlers get out a certain harness, they know to get ready for tracking. The snap of a collar indicates an article detection session, and the click of a leash means it’s time to search for concealed wildlife.

Of course, these competent canines are rewarded for their hard work with toys, treats and a whole lot of love. Tex and Penny live with their handlers and their families. When they retire from  their working life, the dogs will be put up for adoption, with Lamb and Clever given first pick.

Though these young dogs still have a long way to go — tracking dogs’ careers can last five to 10 years — Lamb and Clever know their partners are already home.

“After having her this long, I don’t think I could give her up,” said Clever.