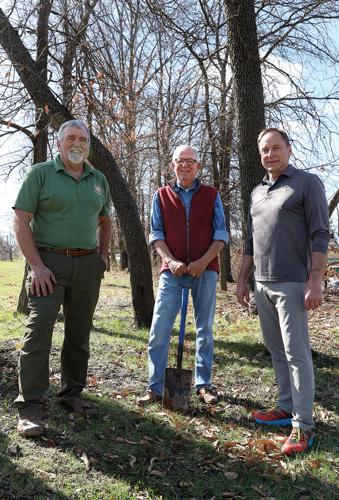 From left: William Spradley of Trees, Forests and Landscapes in Kirkwood, Dan Burkhardt of Magnificent Missouri and Bill Sauerwein of Pedego are part of an effort to plant new trees along the Katy Trail. | photo by Ursula Ruhl 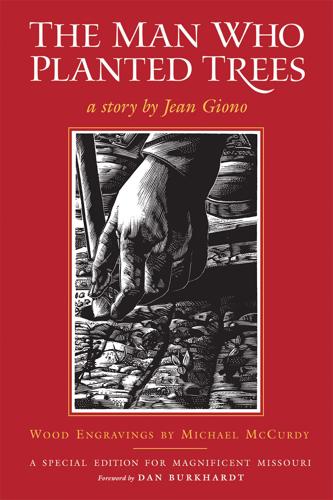 Both Kirkwood and Webster Groves have been designated individually as a “Tree City USA.” That classification reflects citizen appreciation for large, leafy wonders. Now some local folks are extending their love of trees to the Katy Trail and the Missouri River Valley.

Among those involved are Bill Spradley of Trees, Forests and Landscapes in Kirkwood and Mike Rood of Pea Ridge Forest, located in Hermann, Missouri. They are extending their arbor expertise to an area of the Katy Trail in eastern Missouri. Hikers and bikers will enjoy new trees in trail locations such as Marthasville, Peers and Treloar.

In addition to beautifying the sites, the tree canopy will protect trail users from summer sun and stave off trail erosion problems. It’s all part of a partnership between Forest Releaf of Missouri and Magnificent Missouri to plant hundreds of trees along the trail over three years.

“The trees we are planting were grown in our Missouri River bottom nursery in Creve Coeur Park and will find permanent homes near the Missouri River,” said Meridith Perkins, executive director of Forest ReLeaf. She said the project covers the Katy Trail between Hermann and St. Charles to provide habitat, erosion control and shade for generations of Katy Trail users.

To celebrate the launch of this effort, a special edition of the conservation book “The Man Who Planted Trees” has been printed. The celebrated fable captures how planting trees can transform a landscape. It has sold more than 250,000 copies, and is now available at Pedego Electric Bikes in Oakland near the north trailhead of Grant’s Trail. It also can be ordered at MagnificentMissouri.org.

“We hope that this project and our special edition of ‘The Man Who Planted Trees,’ will inspire Katy Trail riders and others to become acquainted with the benefits of tree planting, especially Missouri native trees, and the many wonderful species that Forest ReLeaf grows,” said Dan Burkhardt of Magnificent Missouri.

Project participants Spradley and Rood have written an afterward to the new edition of the book in which they note their training at the University of Missouri School of Forestry. They detail how new plantings consist of trees like bur oak, pecan, swamp white oak, hackberry — the kind of species indigenous to the region’s river valleys.

“Our hope is that this planting project will encourage many of those who visit to become ‘men and women who planted trees.’ Planting trees is not only good for the planet, but also good for all of us,” according to Spradley and Rood.

The tree planter in “The Man Who Planted Trees” is a shepherd, Elzéard Bouffier, who after losing his wife, decides to restore a ruined landscape of an abandoned valley in the Alps by planting acorns and cultivating a forest.

Over four decades, Bouffier continues to plant trees, and the valley is turned into a sort of Garden of Eden. By the end of the story, the valley is vibrant with life and peacefully settled by people. They don’t realize they owe their happiness living in such a beautiful place to Bouffier.

Among the notable fans of “The Man Who Planted Trees” is Peter Raven of the Missouri Botanical Garden. He described it as a basic folktale told in beautiful ways with engravings that are “truly fine.” Raven said we should all encourage tree planting and putting original forests back in place.

“Forests protect local climates and form a buffer against a warming climate,” said Raven. “They add beauty and restore lands deeply disturbed in the rush to a modern world. The book is a tale of success with well-selected words. We have many tree planters in Missouri, and this tale will help them flourish.”

Magnificent Missouri’s Burkhardt said he first read the tree book 20 years ago and thought “it communicated in a wonderful way how small actions — repeated over a long period of time — can create remarkable results.”  He said his organization hopes to improve and enhance the corridor along the Katy Trail.

“This is a monumental job because the Katy Trail is 280 miles long, but it can be done — just as it is in the book,” added Burkhardt. “All of the proceeds from book sales go to Magnificent Missouri to do more of this kind of thing. Our special conservation outposts, like the Trees of Treloar and the Peers Prairie, are both funded by Magnificent Missouri.”

According to Burkhardt, he and the late John McPheeters started Magnificent Missouri to be a catalyst for projects with other conservation groups like Forest ReLeaf “to do things that weren’t already happening,” and to focus attention on the Katy Trail and its landscape corridor.

“The Katy Trail is internationally known — it’s sought out by cyclists from around the world,” said Burkhardt. “It offers a place to explore the Missouri countryside like no other. Ted Jones, who created and funded the trail in the 1980s, wanted to provide a place for visitors to experience rural Missouri close up — things once only seen by riverboat captains and farmers.”

Bicyclists Bill and Carla Sauerwein of Pedego are pleased to have the book, “The Man Who Planted Trees,” available in their Oakland store. They second Burkhardt’s contention that the Katy Trail is one of Missouri’s great natural treasures.

“We certainly believe the tree planting undertaking is an important project for the Katy Trail’s future,” said Bill Sauerwien. “Aside from its fundamental physical impact in preventing erosion and providing shade, trees beautify the trail and make it more appealing to cyclists and hikers.

“Finding a tree canopy on a hot summer day while riding can be like finding  an oasis in the desert,” he added. “A stretch of tree canopy provides relief from the sun and the cooler temperatures provided by the shade can really be energizing.”

The Pedego couple recently rode the stretch from Marthasville to Hermann and described it as one of the most interesting parts of the Katy Trail to explore. They said the small German-settled towns are historic and quaint, while the bluffs along the Missouri River are gorgeous.

“Cycling the Katy Trail is all about enjoying the landscape and absorbing what is has to offer — slowly — so that it makes an imprint on your mind and a lasting memory,” said Bill Sauerwien. “The fertile river valley is vast and rivals Napa Valley in its beauty. Stopping for a glass of Missouri wine along the way can make it even more enjoyable.”