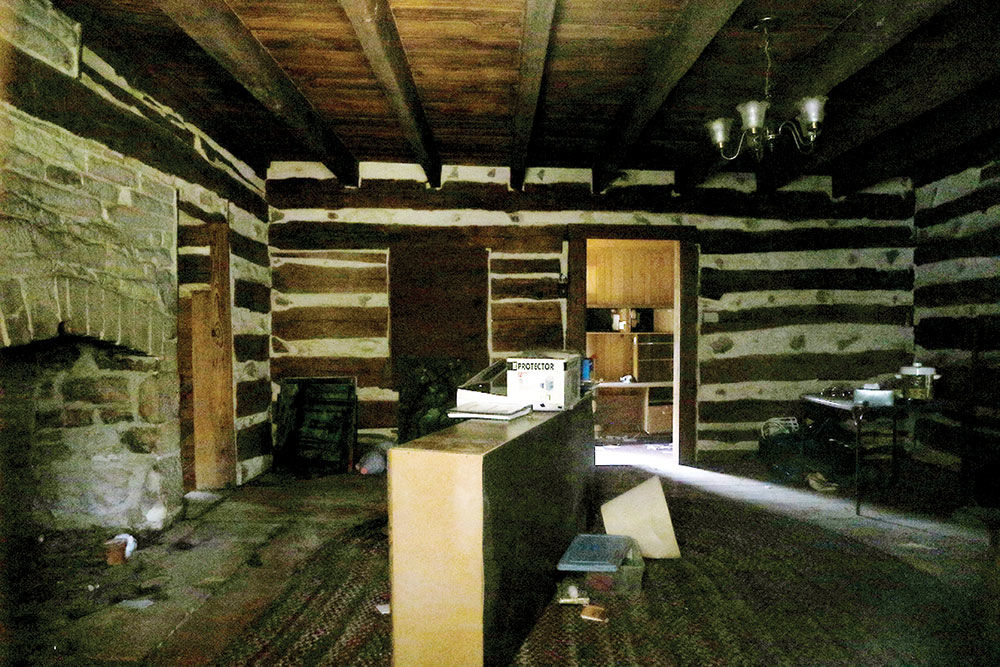 The Joseph Sappington House has gone through several renovations over the years, exposing the original logs and stone fireplaces. 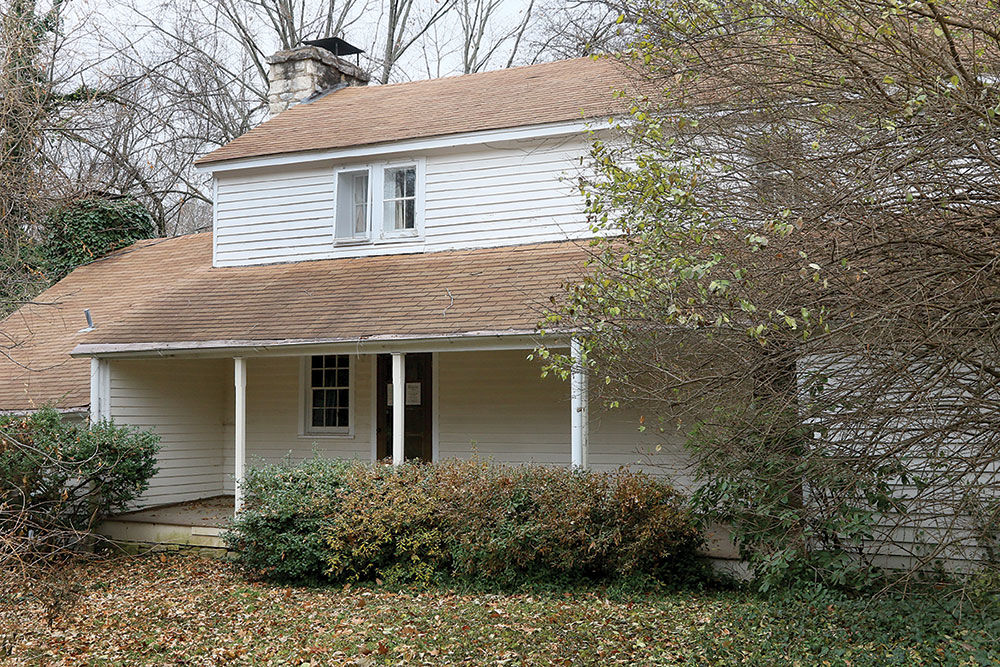 A single-story “five bay” porch is located at the front of the house. The exterior is covered in what is believed to be the original weatherboarding. 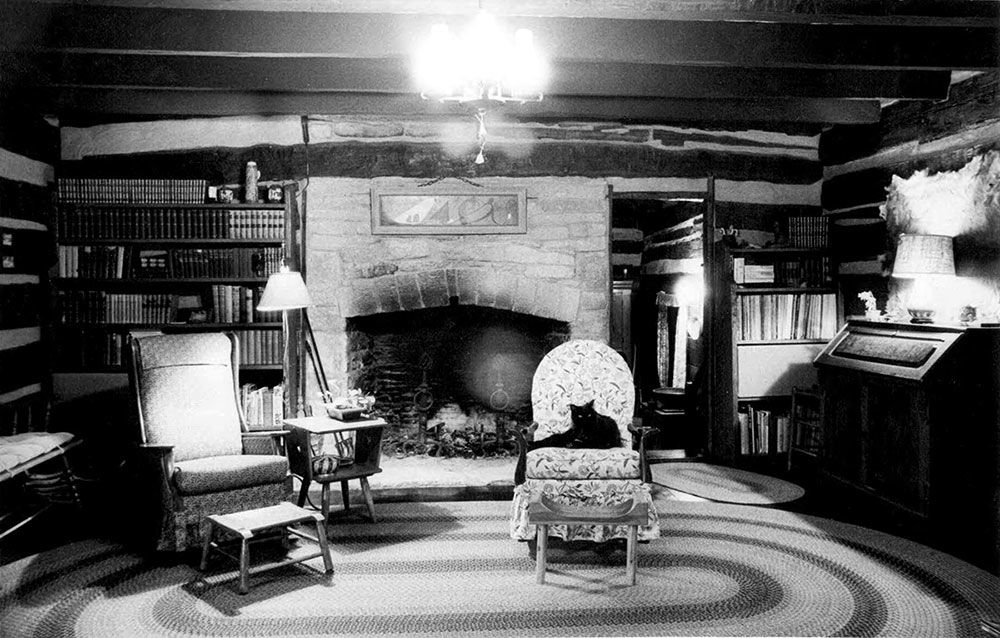 This photo showing the interior of the Joseph Sappington House was taken in the early 1980s as part of the nomination of the house to the National Register of Historic Places. 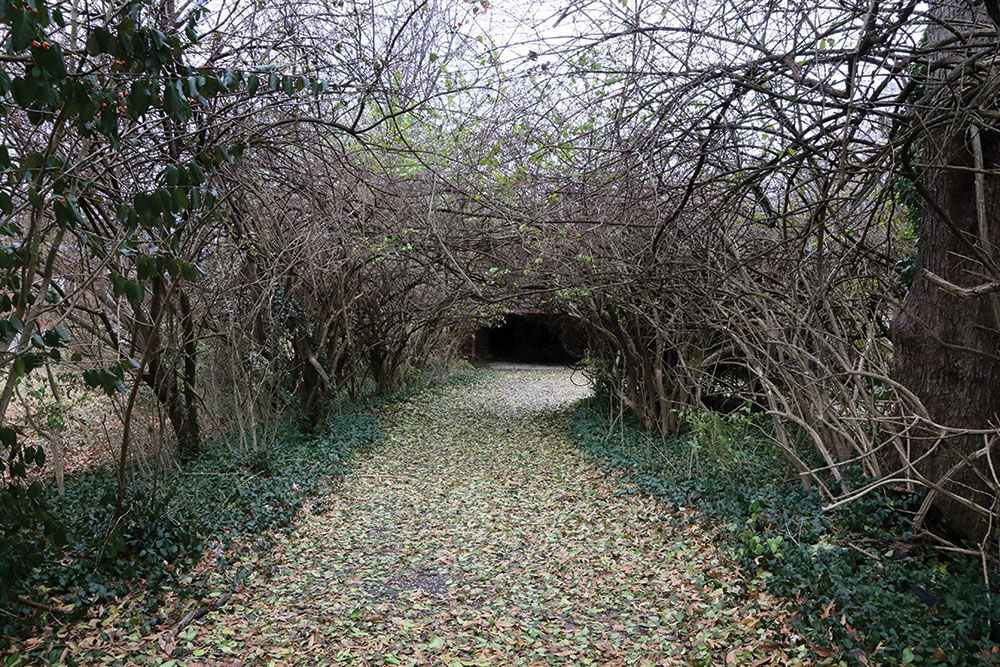 While few may realize it, there’s a hidden historical gem located on Clearwater Drive just south of Grant’s Farm.

The Joseph B. Sappington House is a two-story log cabin built in 1816. For what may be the first time in the property’s long history, the house is currently unoccupied and the owner’s intentions are unclear. Local historians say there is cause for concern over the future of this Sappington family treasure.

The Joseph B. Sappington House is the least known among a group of five South County area “pioneer houses” tied to the Sappington name. Constructed of logs, the house was added to the National Register of Historic Places in 1982. It was the last of the five area pre-1820 Sappington-related homes to be added to the list.

James and Charlotte Lubbock acquired the house in 1953. Over the years the couple worked in several phases to restore their Clearwater Drive home to its original look. Panel and plaster were removed from interior walls in all three rooms, exposing the original log surfaces. Stone fireplaces, filled in and covered over with the advent of stoves, are once again exposed.

A fire in 1988 damaged the home, but the Lubbocks again lovingly restored it as much as possible to its original look.

Charlotte Lubbock died in 2009. James Lubbock, a journalist, photographer and a member of the Sappington-Concord Historical Society, died Feb. 1, 2017.

Since James Lubbock’s death, the Joseph Sappington house has remained unoccupied. A notice posted on the front door informs that the property is under the management of the P.K. Management Group, based in Florida. There is no indication that the house is for sale.

“Our historical society is concerned,” said Stephen Hanpeter, president of the Sappington-Concord Historical Society. “Danny Gonzales, the former St. Louis County Parks historian, notified me of his concerns about a year and a half ago, when he found out the property was vacant. He was not able to find out anything from the company that holds the property.”

Hanpeter said it is his understanding that the Lubbocks had a reverse mortgage on the property, and that upon James Lubbock’s death the property went to a bank.

“In my periodic monitoring of the property, I would say that it is being minimally maintained. The house is winterized according to the notice on the door,” Hanpeter said.

St. Louis County Historian Esley Hamilton, who successfully nominated the Joseph Sappington House to the National Register Of Historic Places back in the early 1980s, said he also learned that the property is owned by a bank.

Like Hanpeter, Hamilton said there is reason for concern over what might become of the historic home.

“The property is located in unincorporated St. Louis County, and the county doesn’t have a county preservation ordinance. So, it could be torn down. A bank would look at the value of the property, and may find more value there than in the structures,” Hamilton said. “We are all concerned. The St. Louis County Historic Buildings Commission is concerned about it, but we don’t know what to do.”

Hamilton said that what makes the Joseph Sappington House so unusual is that the home is actually three separate log structures, with one of the three structures added as a second floor.

According to the book, “Sappington Concord A History,” Joseph Sappington built the existing two-room cabin (a second story was added in 1821) just south of Gravois Road in 1815-16. He didn’t own the land, but was allowed to settle there under homestead terms. Five years later, in 1821, Sappington acquired 312 acres, including the present property, for $1.25 an acre.

Joseph Sappington was born Nov. 29, 1786, in Kentucky. He married Elizabeth Wells, and the couple had 13 children.

One of the largest families in the St. Louis area, John Sappington had 17 children. The homes of two of his sons, Thomas and Zephaniah, are on the National Register of Historic Places, as are two homes belonging to his daughter Elizabeth (Mrs. William Lindsay Long).

Joseph Sappington is believed to have been a nephew of John and Jemima Sappington, according to “Sappington-Concord A History.”

In the middle of the 19th century, the property passed from the Joseph Sappington family to the Rott family, and then to the Hertel family in 1915. The Lubbocks purchased the property in 1953 after the original farm had been subdivided for residential development.

Esley Hamilton provided a description of the house when nominating it to the National Register of Historic Places. The two-story house faces east, with chimneys at each end of the house, and a third chimney on the south end of a one-story wing.

“The house is built of logs, but like most such pioneer structures it was weatherboarded as soon as prosperity and availability permitted,” according to Hamilton’s description. “The many coats of paint on the present boards suggest that they are the originals.”

“Even with necessary modernization, the interior of the Joseph Sappington house now looks much more like its early self than it did in 1953,” Hamilton wrote.